By newsroom on October 3, 2018Comments Off on Samsung gives iconic sculptures a contemporary makeover in new OOH campaign

Two of the world’s most famous male statues have been spectacularly reimagined as modern domestic demigods for a bold new Samsung campaign. The figures, which are the focus of a bold, new COOH campaign feature near-identical versions of the original masterpieces bar a few unmissable, cheeky tweaks. 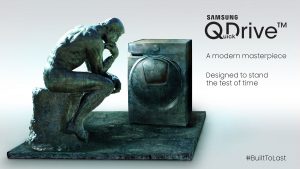 Michelangelo’s David has been recreated wearing briefs, with a shirt flung over his back, as he takes charge of the weekly wash while Rodin’s The Thinker poses, deep in contemplation at a washing machine.

Each statue took six-strong design team two months to create, working from multiple reference to recreate a faithful rendition of each sculpture in microscopic detail. The reimagined statues of iconic male nudes give a humorous nod to revealing new Samsung research which found that 75% of men have little or no idea how to operate the domestic appliances they have at home. 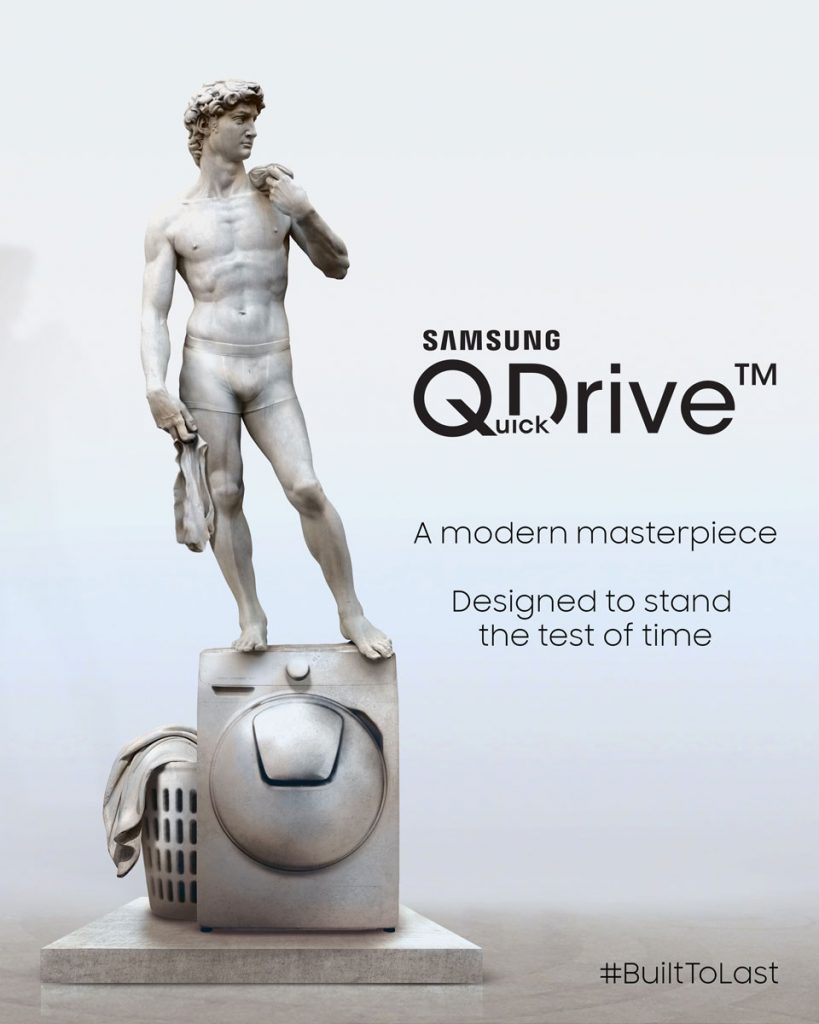 Taylor Herring was tasked by Samsung with developing a stand-out campaign to showcase the brand’s commitment to creating quality, long-lasting home appliances, while shining a spotlight on its most evolved washing machine – QuickDrive.

The ‘Modern Masterpieces’ campaign will run across creative out of home, press, digital, mobile and social media. The creative, which was produced by St Mark’s Studios and directed by Taylor Herring will be showcased at launch via a full screen take-over at Piccadilly Circus in central London.

The modernised statues meanwhile are set to be installed at high footfall locations around the capital including Kings Cross, Russell Square and Battersea Park. 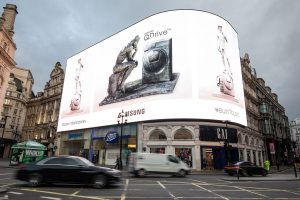 The original David, located in the Galleria dell’Accademia in Florence, took Michelangelo more than two years to build and weighs the equivalent of eighty men. Rodin’s bronze sculpture The Thinker, revered for its contemplative posture, resides at the Musee Rodin in Paris.

The new artworks are of course, open to interpretation – just as the original Thinker invites us to debate as to whether he is in either a contemplative or mourning pose, Samsung’s modernised male subject could be interpreted as being in a state of confusion, as he ponders which wash cycle to select. 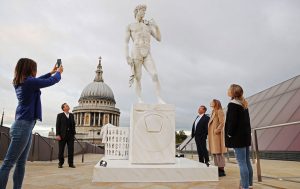 Samsung’s QuickDrive washing machine went through over 150 different tests (tested thousands of times over), before being released to market.

Ruth Storey, Head of Marketing for Home Appliances, Samsung Electronics UK & Ireland, said:
“We have updated these classic sculptures in a playful bid to remind the public that our home appliances are masterpieces of modern design. Our Home Appliance products are tested thousands of times and come with at least a 5-year warranty, underpinning our confidence in delivering products that – like the iconic statues – are built to last.” 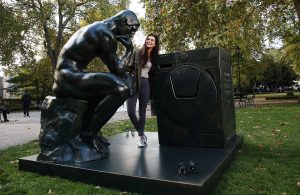 The new Samsung research provides a fresh take on gender differences when it comes to housework. It appears that men are suffering from ‘FODA’, a male condition involving a fear of domestic appliances. 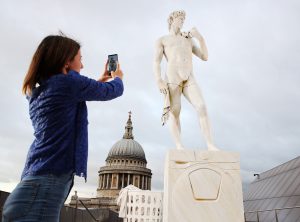 It appears that the washing machine instils the most fear in men, with 63% admitting to being completely stumped when trying to work out washing machine settings and laundry care symbols. In fact, when faced with the task of deciphering fabric care label symbols – such as ‘Do Not Tumble Dry’ and ‘Delicate Wet Clean’ – men scored worse than women on 9 out of 10 questions.

The statues of Domestic David and The Clean Thinker have been installed at central London locations including One New Change, Kings Cross, Russell Square and Battersea Park.