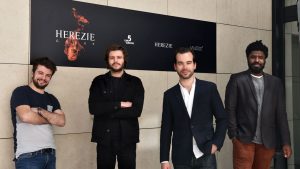 Joseph Dubruque, Axel Didon and Raphael Stein are part of a creative team. They came up with the “Sounds of Trauma” film for the David Lynch Foundation, an operation that was multi-awarded with prizes at Cannes Lions, D&AD, One Show and Clio Awards.

They recently made waves with campaigns that went viral like “Body Can’t Wait” for Handicap International or “Hide Yourself” for Uppersafe.

As for Paul Marty, who was previously Head of Social Media & Creative Content, he is in charge of the social media department of Herezie. He has also been contributing to creative operations, such as “A Social Board Game” for l’Observatoire des Inégalités, that racked more than thirty million views with no media buying and which was one of the most viewed ad campaigns 2017 in France.

Baptiste Clinet, Executive Creative Director of Herezie Group, comments on these nominations :
“Thanks to these dedicated, curious, motivated and gifted creatives and our strong team, Herezie is transforming itself. We have big ambitions within the group and these nominations are part of the way forward. Our philosophy is to rather promote internal talents rather than hiring externally. I feel extremely proud of the work that they have accomplished and I am certain that they will keep on creating great things for our clients.”

Having joined Herezie in 2013 (Raphael), 2015 (Joseph & Axel) and 2016 (Paul), these four creatives have made an impact through their work ethic and their adaptation to the new creative push of the Herezie Group.