By newsroom on May 3, 2018Comments Off on McCann Worldgroup promotes Chris Macdonald and Nannette Dufour 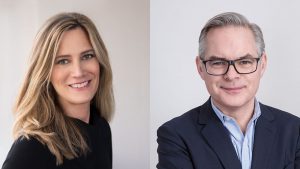 Harris Diamond, Chairman and CEO, McCann Worldgroup, said, “Nannette and Chris will work along with Bill Kolb, who is President, Diversified Agencies, to further drive creative marketing solutions that will help our clients thrive in this business environment. With this leadership team, which also includes Global Creative Chairman Rob Reilly and Global Chief Strategy Officer Suzanne Powers, along with our discipline and operational leadership, we are well positioned to further accelerate our ability to create growth opportunities for our clients and deploy the best set of multiplatform resources anywhere in the world.”

Luca Lindner, who has been President of McCann Worldgroup, has announced his planned mid-2018 retirement from this full-time role and will serve as a consultant to the leadership team.

Nannette Dufour will add operational oversight over all of McCann Worldgroup’s global and key regional accounts, ensuring that all of these clients are receiving the required geographic and discipline resources. Dufour first joined McCann Worldgroup in 2012 and was named Chief Client Officer in 2015. In 2016, she was named to Ad Age’s “Women to Watch” list.

McCann Worldgroup, which was named Adweek’s 2017 “U.S. Agency of the Year,”  also led all agencies in global and U.S. new business wins in 2017, according to R3 Worldwide. McCann was recently recognised as Network of the Year at the 2018 International ANDY Awards, following many top global creative honours in 2017.

Last year the agency won the most top Grand Prix (six) at the Cannes Lions International Festival of Creativity and was the most awarded Cannes agency in North America. Also in 2017, McCann was named Agency of the Year and/or Network of the Year at the Clio, One Show, Cresta, Epica, Midas, New York Festivals, LIA, ANDY, ADC, Golden Drum, and Cristal awards festivals as well as at the EFFIEs shows in North America, Latin America, and the Middle East/North Africa.

McCann Worldgroup promotes Chris Macdonald and Nannette Dufour added by newsroom on May 3, 2018
View all posts by newsroom →