By newsroom on March 28, 2018Comments Off on MRM//McCann Santiago Launches Public Safety Film for Mutual de Seguridad and Hoyts Cinema in Chile

Chile is recognised as a country that endures great seismic activity, which has led to the institutionalised practice of airing a safety message in movie theatres before the feature film begins, complete with recommendations for the safest ways to navigate any emergency situation.

In this context, MRM//MCCANN Santiago created for its client Mutual de Seguridad a new public safety film that will be shown nationwide, in all Hoyts Movie Theatres, through 2018. The film stars the Argentine-born stuntman for international movie star Bruce Willis, who invites moviegoers to follow the safety instructions in the film.

The 1:27 film stars Pablo Perillo, the official stuntman for Bruce Willis, who has worked in films such as “Die Hard 4.” The agency also used the voice actor who records all of Bruce Willis’ dubbed dialogue across Latin American markets, Mario Castañeda, who lives in Mexico and also performs the voice of Dragon Ball’s “Goku” character. 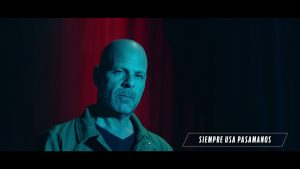 Cristián “Ritalín” León, MRM//McCann Santiago general creative director, adds: “When we were invited to participate of the pitch, we thought: If we want to direct a message of public safety in the cinema, who better than an action stuntman to do it? The job, however serious in its purpose, was approached in a playful and humorous way. As a result, we got a fun movie with explosions, babies in the air, burning stunts and giant rocks, which promotes the brand while entertaining the audience.”

The film, released on March 23, will play before all Hoyts Cinema movie screenings in the country for the next 12 months. The action stunt team company Stuntman.cl and Carroza FX, a special effects company based in Chile, also took part in the initiative.

One day before the film launched, Pablo Perillo walked through the busy Costanera Mall Centre in Santiago, causing euphoria in moviegoers. Pablo resembles Bruce Willis so strongly that he has been stopped in public for the last 28 years and asked for his autograph and his photo.

Pablo’s appearance led to a wave of memes across social media, interviews in the most important newspapers of the country, and even a cover in LUN, the most-read newspaper in Chile. The subject became a national trending topic on Twitter throughout the day.