By newsroom on January 11, 2018Comments Off on Space appoints Cat Kempsell and Sam Pepper as Creative Group Heads 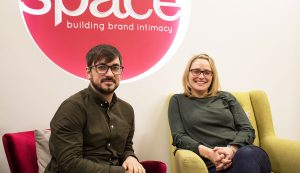 Kempsell, who has been at Live & Breathe for the past three years, has led the creative development on a number of FMCG clients including Pladis, Happy Egg Co and Avonmore whilst Pepper has spent the past nine years responsible for delivering experiential campaigns at Wasserman for the likes of Bacardi, Spotify and Nike.

Both Kempsell and Pepper will report into Greg McAlinden, Creative Director, and, along with McAlinden, will be charged with continuing to raise the agency’s creative profile and reputation.

The 40-strong independent agency, which grew its gross income by over 30% in 2017, provides its clients with a suite of creative services including advertising, digital, social media, shopper and experiential marketing.

For William Grant & Sons, Space recently launched a TV commercial for Glenfiddich running in emerging whisky markets such as South Africa and India and was also appointed global creative lead agency on their Monkey Shoulder and Drambuie brands.

Greg McAlinden commented: “We’re continuing to build a formidable team of multi-disciplined talent capable of meeting the evolving creative needs of our clients. In Cat and Sam, we have found two high calibre creatives with a deep understanding and appreciation of the FMCG, drinks and sports sectors and look forward to seeing the impact their ideas will have in transforming our clients’ businesses.”