By newsroom on February 25, 2016Comments Off on Stampede launches at Lakeside Food Court with digital displays and animation by Kaleidovision 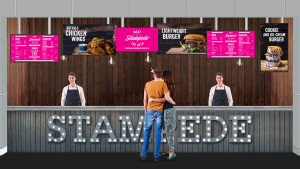 Digital screens created by Kaleidovision, the specialist digital and music consultancy, have helped a new fast food restaurant launch successfully this month in a competitive market place at Lakeside Shopping Centre in Essex.

The screens show a series of stunning photos of the food on offer, plus animation layered on top to create a sense of interest and movement, alongside the menu, prices, and a rolling-display of the eye-catching ‘bull’ themed logo on a magenta background. The striking display is to attract customers and reflect the brand’s sense of fun.

The use of animated digital screens set at different heights in the fast food sector is unusual and their introduction at Stampede will help it stand out from the herd.

The maverick brand is lively and full of energy, with its website describing their chicken wings as ‘cluckin marvellous’ and stating: “We’ll be burgered if you’ll find better ribs and burgers.”

The restaurant design includes copper and brick fittings, while the food is what customers would expect at a gastro pub. Stampede’s aim is to shake up the fast food sector by providing top quality.

“I knew digital screens would work brilliantly with this brand and got in touch with Kaleidovision having been impressed by their work before,” says Stampede director Grant Targett-Navarro.

“We needed help standing out in a busy food court and Kaleidovision has really helped us to do just that. Our aim with Stampede is to produce gastro quality food in the fast food sector to stir the sector up a bit. And the digital screens reflect that bid to do things differently.”

The team from Kaleidovision worked closely with Stampede’s creative team to put together the content for six digital screens which form the backdrop for the food counter.

Set at different heights, the screens show images of the food on offer, the menu and prices. Kaleidovision created engaging animations, such as icing sugar being sprinkled on to a pudding and steam coming off the hot food, to draw people’s attention to the screens.

After 25 seconds the product animations all change simultaneously, the Stampede logo of a metal bull appears and then the cycle repeats. Every 15 minutes an image of a cow, a pig and a chicken appear spinning on the screens, imitating a fruit machine.

The team sequenced the content, considering how long customers would need to read the menu and prices before the animations begin, so that it reflected that sense of fun.

Kaleidovision MD, Andy Pitman, says: “It was an opportunity to disrupt the norm in the fast food sector. We wanted the screens to have a big impact and look different, but we also wanted to include an element of fun with the sting and the animations. Stampede has a bit of swagger about it and the digital screens reflect that brand. You can really see that attitude coming through in the way we designed the content. The digital screens reflect the brand in a fun and quirky way, but they still do their job of informing customers about the menu and prices.”

Targett-Navarro adds: “Kaleidovision has done an amazing job. It looks absolutely stunning when you’re in front of it. As this was in a food court we thought the movement on the digital screens would really help to attract the attention of shoppers. I don’t think it could be better. It really enhances our brand and sets us apart.”

Kaleidovision will provide digital screens for Stampede when it opens a second restaurant in Leeds soon.

Stampede launches at Lakeside Food Court with digital displays and animation by Kaleidovision added by newsroom on February 25, 2016
View all posts by newsroom →