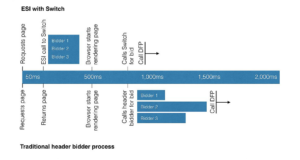 An innovation in digital advertising using ‘Edge Side Includes’ (ESI) calls has been launched by Switch Concepts, which promises to speed up publishers’ pages by reducing the time taken between a user requesting a web page and it appearing complete with ads in their browser.

Tests carried out with a major UK news publisher revealed that, by initiating the ad request earlier in the page load process (a concept similar to Google AMP’s Fast Fetch idea), Switch’s platform can respond with a bid within 30 milliseconds when called from the header of the web page. This is multiple times faster than the traditional header bidder set-up used by publishers and significantly reduces latency, dramatically cutting page load times, while also improving the user experience and delivering better viewability for advertisers.

“Traditionally, when a user opens a publisher’s web page, their browser requests the page from the publisher’s CDN or edge servers, which then return it to the browser,” explained Mark Duncan, Head of Business Development at Switch. “As the browser loads the web page, it sends out an ad request to the different header bidders’ servers. The header bidders have to make their decision and then respond. A maximum timeout of up to one to two seconds is usually set in a publisher’s wrapper tag to wait for the header bidder’s response.

“Using ESI calls, the CDN or edge servers call Switch’s platform to initiate the ad auction at the same time as returning the web page to the user’s browser. When the browser requests an ad upon rendering the web page, the auction and decision will have already been completed by Switch’s platform and the bid price is returned almost instantaneously. Calling for the ad earlier in the process in this way significantly reduces the timeout required to just a few milliseconds.”

The Switch ESI solution speeds up the entire page-loading process, solving latency issues introduced by header bidding, a major pain point for publishers, while making the programmatic eco-system far more efficient. A reduction in timeout occurrences will increase buyer participation rates, which is good news for publisher yield. Switch has an international patent application relating to this technology.