By newsroom on January 12, 2016Comments Off on Audi enters Google competition to put Quattro Rover on moon 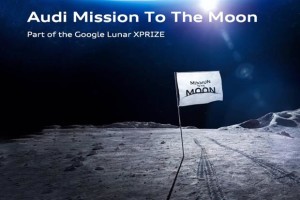 Audi has put together a team of crack scientists and engineers to manufacture a lunar rover and enter Google’s XPrize Foundation space competition to put a robotic vehicle on Earth’s cosmic neighbour, a project that encapsulates its ‘Vorsprung durch Technik’ slogan.

Audi has teamed up with a group of engineers dubbed ‘The Part-Time Scientists’, and will use its vehicular technologies – spanning lightweight construction methods (using magnesium in the build), piloted driving and Quattro all-wheel drive – to inform the project.

The Audi Concept Design Studio in Munich is revising the Rover, which will soon be renamed the ‘Audi Lunar Quattro’.

Google’s $30m Google Lunar XPrize is aimed at inspiring engineers and entrepreneurs to develop low-cost methods of robotic space exploration. The winning team must design and build a lunar rover that can be placed on the moon, explore and send HD video back to Earth. 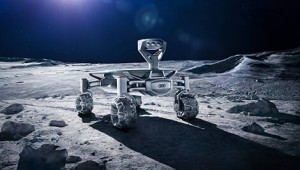 Most the of the Rover’s components are made from high-strength aluminium, and it will use solar cells as its main source of energy, with a compact lithium-ion battery powering a 500-metre drive on the Moon’s surface.

Two cameras mounted on the rover’s front will send detailed 3D images back to Earth, while a third camera will study lunar materials.

The plan is to launch the lunar vehicle into space in 2017, with the vehicle hitching a ride on the Dnepr Rocket, travelling 380,000km at up to 7.8kps.

Audi has produced a video explaining the ambitious project. While the automotive’s mission is clearly very impressive, the video voiceover artist falls victim to an extreme case of portentous-itis, declaring, “The Moon. Our closest neighbour in the Solar System. And yet it has always seemed distant. And unreachable… Until now.”

Audi’s dedicated microsite carries a number of other videos explaining the project.

Audi enters Google competition to put Quattro Rover on moon added by newsroom on January 12, 2016
View all posts by newsroom →