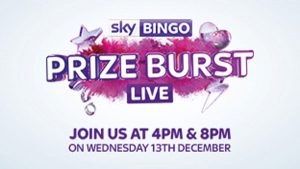 The activity, taking place on Wednesday â€“ 13th December â€“ marks the first time Sky Betting and Gaming has partnered with Amy Nickell â€“ presenter, entertainment journalist, parenting author, childrenâ€™s entertainer and interviewer. Amy was previously the face of Yahoo omg! and has worked with brands like Tesco and Playstation.

During the two 35min live streams Facebook Live viewers will see Amy in a room full of gem shaped balloons, and be able to comment as the action takes place. Amy will pop balloons as the game progresses, with each popped balloon revealing what prize that contestant has won. The prize will then be picked from a pile of prizes LIVE in the video, reflecting the popular Sky Bingo Prize Burst game in a live action format for the first time.

Designed to convey Sky Bingoâ€™s â€˜Expect Excitementâ€™ brand proposition, each aspect of the activity has been produced in-house by bigdog. Creative from Sky Bingoâ€™s TV ad â€“ also created by bigdog â€“ will be carried through to this activation, with overlaid graphics used on screen during the broadcast to encourage engagement from viewers, as well as to reveal the winners.

Just shy of Â£10k worth of prizes will be up for grabs, via two live streams at 4pm and again at 8pm.

As well as the giveaway itself bigdog created and executed a multi-tactic campaign to drive reach in the run-up to todayâ€™s event, ranging from scheduled posts allowing for advance subscription, through to email blasts, app notifications and more. This Facebook Live giveaway activity aims to support the Free to Play game â€œPrize Burstâ€, which bigdog developed and launched in November.

Michelle Keenan, Social Media Executive (Gaming) at Sky Betting & Gaming, said: â€œAlthough it only launched last month the Prize Burst game is already proving popular, and when we were looking at ways to promote it Facebook Live was an obvious choice. bigdogâ€™s idea to create a live action version of the existing creative is sure to engage our viewers, and weâ€™re really excited to be partnering with Amy for the first time.â€

Joe Stevens, Social Media Manager at bigdog, adds: â€œFacebook Live is a brilliant platform, especially for gaming brands like Sky, as we saw from the success of our previous Sky Vegas #WinningFeeling activity. We were able to apply lots of learnings from that to benefit Sky Bingo this time around, weâ€™ve got a checklist in place. By looking at everything from optimising studio time to the importance of fast-paced, yet simple mechanics, weâ€™ve been able to create something we know will hit the brief and exceed viewers expectations.â€