By newsroom on May 23, 2016Comments Off on Catch launch Thomas Cook Airlines’ new digital campaign #CatsOnAPlane

The campaign, which launches as part of a wider advertising initiative for Thomas Cook Airlines in both the UK and Germany, aims to highlight the airline’s belief that customers “deserve better” when flying on their hard-earned holidays. 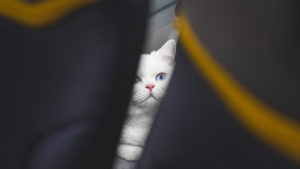 #CatsOnAPlane sees a team of furry testers try out Thomas Cook Airline’s newly refurbished fleet in a bid to highlight the quality of the airline’s newly refurbished fleet. The animals were used to test the interiors of both Thomas Cook Airlines’ planes and those from sister airline, Condor, playing on the perception of them being creatures of comfort.

The campaign will see activation across Twitter, Facebook and Instagram and involve a series of short videos. These will show the feline characters challenging the brand’s standards including examining everything from the carrier’s award-winning service to comfort levels and seat quality.

The filming involved a 24-hour shoot with 10 cats – each with their own distinct personality – on an Airbus A330 and Boeing 767 at Manchester airport. Each short video features the cats exploring different areas of the planes, including Premium Economy for Thomas Cook Airlines UK and Business Class for Condor.

To ensure no cats came to harm on the shoot, vet Aniket Sardana was onsite for the full duration of filming. 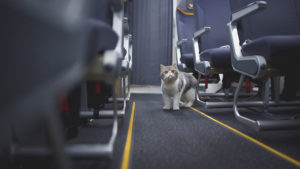 Speaking of the campaign, Senior Group Marketing Manager at Thomas Cook Airlines, Tom Morey said: “No-one can assess comfort like a cat. They’re the hardest customers to please, which is why we wanted to test our new interiors with the best. And the results left the cautious kitties feline great.”

Discussing the launch, Catch’s Creative Director, Sam Chatwin added: “Cats are the undisputed champions of the internet. They’re fussy, demanding and know exactly what they want. What better way to put the airline’s service to the test. We love working with the team at Thomas Cook Airlines, they’re fearless and you can’t ask for more than that in a client.”