By newsroom on October 30, 2013Comments Off on Corvette Stingray Presents “The World’s First Reverse Test Drive”

B-Reel strapped each driver with the latest in remote biometric monitoring systems, allowing them to precisely measure vital responses to driving the Stingray. EEG data, which measures voltage fluctuations resulting from ionic flows within the neurons of the brain, was measured using the BrainAvatar system. 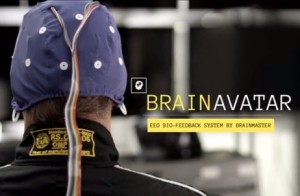 Other vitals including electrocardiography, heart rate, and respiration were measured using a BodyGuardian monitoring system. From feelings of trepidation to increased calmness/ fearlessness, B-Reel found each driver reacted differently when they drove laps around the track, with a pro-driver providing the baseline for comparison.

The Stingray itself was fitted with a V-Box recording device, allowing B-Reel to gather precise data on the performance of the vehicle. Velocity, track position, engine speed, and G-Force were only a few of the variables they were able to use to assess each driver’s performance.

With B-Reel’s previous experience with brain-wave experimentation through campaigns with furniture maker Varier, which analyzed kids’ thoughts and turned them into furniture, and Mind Scaletrics, which allowed users to control the speed of a toy car with just their mind, they were able to track the drivers’ neurological data to capture a new driving experience.