By newsroom on February 18, 2015Comments Off on Creativeland Asia Brings Back MTS Internet Baby

Yet again, the latest commercial by MTS India, is a prequel and not so subtle assertion that digital natives will require internet data in a revolutionary way. Creativeland Asia has conceptualized the latest integrated campaign for MTS Homespot Instant WiFi.

Last year, the charismatic ‘MTS Internet Baby’ drew a whopping 30 million eyeballs on YouTube alone. One reason for this was the truth it unabashedly told; for kids and digital natives internet connectivity is more than a want, it is a need.

Amitesh Rao, Director Brand & Media, MTS India, says, “After the phenomenal success of ‘Born for the Internet’ campaign launched last year and looking at overall response we knew that consumers strongly connect with the MTS Internet Baby. So we wanted to continue building on this brand proposition and expand the market place”. Amitesh further added, “As the name suggests, the Homespot Instant WiFi provides plug and play access to multiple internet users simultaneously. This launch marks a strategic shift in focus for MTS from being primarily a dongle driven Data Company to a WiFi solutions provider”.

Speaking about the campaign thought, Sajan RaJ Kurup, Founder and Creative Chairman, Creativeland Asia, said, “In this campaign, The MTS internet baby personifies the ever demanding internet generation that see wifi as a basic necessity just like food and shelter. Creatively we planned it like a prequel to our last years most talked about MTS Baby TVC and set it from a time before he was born.” 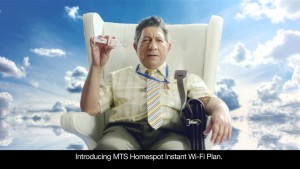 The commercial opens with a mother, doctor and nurse in a birthing room, all waiting for labour pain when suddenly, ‘poof’, and the baby bump vanishes. Everyone in the room is amazed. Next a pram rolls amidst heaven and stops in front of an occupied God. The baby starts to reason with God about the cruelty of sending him into a home that is not setup for WiFi. The baby argues ‘God is toying with his future.’ He exclaims ‘No WiFi! No Go!’

There is a sudden satirical change where God appears as a salesman for MTS Homespot Instant WiFi. He enlists the many benefits of the product. This is when the baby feels convinced to be born. The commercial ends with the baby asking his parents for the WiFi password.

The commercial is produced by Earlyman Films.