By newsroom on April 25, 2013Comments Off on Droga5 Names Team Ahead of London Launch 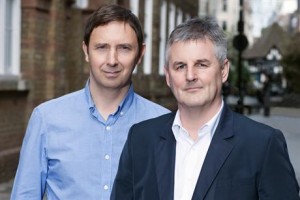 Droga5 London will be run by the chief executive, Kevin Dundas, who has been poached from 180 Amsterdam; the executive creative director, Nik Studzinski; and the head of account management, Olivia Legere.

Droga5, the much-lauded creative network headquartered in Manhattan, is to open a London office in June, positioned as a European hub for global clients.

Dundas has spent the past three years as the managing partner and president of 180 Amsterdam. He is a former chief executive of Saatchi & Saatchi and has held senior roles at Publicis and Y&R London.

Studzinski has been at Droga5 for three years, working on campaigns for Puma, Mondelez International and Coca-Cola. Before that, he was the executive creative director at Mother London.

Legere, who began her career at Unilever, joined Droga5 in 2009 to run business development.

“You can’t build a truly influential global company without having a strong presence in London,” Dave Droga, the agency’s founder and creative chairman, told Campaign. “It is, pound for pound, the most creative market in the world, which is why I am as excited as I am intimidated about this new canvas.”

Droga5 is understood to be close to signing a lease on a “central London” location. The office intends to serve a mix of existing Droga5 clients and other global brands. More management staff, including an additional ECD to work alongside Studzinski, are close to being confirmed.

Launched in 2006 in New York by Droga, a former ECD at Saatchi & Saatchi London, the network already has an office in Sydney.

“Droga5 has always worked on a global scale,” Andrew Essex, the agency’s vice-chairman, said. “Now, by adding a European hub to our offering, we’re even better-positioned to help our clients achieve their international brand and business goals.”

Droga5 Names Team Ahead of London Launch added by newsroom on April 25, 2013
View all posts by newsroom →