Bentley and Keko commission Kit Lynch-Robinson and Great Guns to create the launch film for the first ever re-design of the Bentley Continental.

Bentley is aiming to build upon record sales and the burgeoning success of its Bentayga SUV with this all-new, third-generation Bentley Continental GT sports tourer, which has been unveiled for its public debut at the 2017 Frankfurt Motor Show. 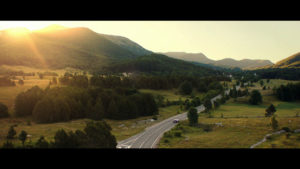 Shot around the breath-taking scenery of the Dalmatian Coast in Croatia, the concept was to reveal this stunning new design with the breaking light of dawn. Director at Great Guns, Kit Lynch-Robinson comments: â€œThis was such a gift of a script â€“ a redesigned classic and a study of form and light. I wanted the film to be understated and subtle. It was crucial to shoot in the magic hour, so all of the locations were chosen for their compass aspect and when the sun would be rising or setting. It may be a bit old school but there is a reason car commercials used to be shot exclusively in the magic hour – they look stunning in that light with the metal swirling.â€

In order to capture the Bentley in the perfect light and environment, Kit researched locations where the roads were sweeping but not arid in surrounding to show off the luxury feel of the car. Settling on Croatia as the perfect place, Kit used both a Russian Arm and drones to capture the sweeping shots and tease out the design lines of the new model. Lynch-Robinson comments: â€œI am usually hitting someone around the head with a frying pan, blowing something up or hurtling up a race track at 180mph, so this film really 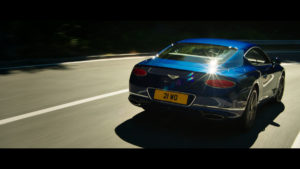 gave me an opportunity to show off a more serious beauty side to my work. Bentley as a marque is pretty important to me. Itâ€™s a British car manufacturer that embodies what the Brits export well – refined luxury. It was so important that the final film emanated the same refined luxury as the car.â€

The main film will be released online and on Bentleyâ€™s website. A shorter version of the film was screened at the 2017 Frankfurt motor show, which was the first time the physical car was revealed to the worldâ€™s press.