By newsroom on February 12, 2016Comments Off on NME unveils Making a Murderer-style Kanye West cover as it reaches highest ever circulation 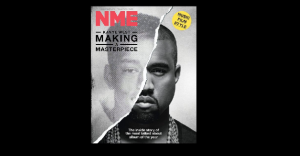 NME’s new approach is resonating with millennials following its repositioning as a free weekly title.

The Time-owned publication’s first free-distribution ABC figures indicate that it has built an audience of over 307,000 over the past six months, since dropping the price tag and relaunching in September of last year with a widened content remit spanning music, fashion, film and food.

Music is still the most popular topic the magazine’s 18-34 year-old audience like to peruse, according to an independent YouGov study, which noted that the brand is delivering a gender-neutral audience, with reach of over 40 per cent among women.

The news follows the launch of the title’s latest cover, which features an image of Kanye West in a pastiche of the poster for Netflix series Making a Murderer.

The cover line reads: “Making a masterpiece, the inside story of the most talked about album of the year,” in reference to the musician’s forthcoming record T.L.O.P.

The magazine’s shakeup has had a knock-on effect on its digital portfolio. In December NME.com noted a year-on-year 25 per cent increase in unique visitors, and upped its social following by 24 per cent to 2.1 million.

“Not only are we now reaching more people every week in print but there has been a compound effect on our other platforms,” he said. “And while NME continues to evolve, it also continues to spark debate, divide opinions and – when you look at the array of talent on the covers – play a key influential role in music, film and beyond.”

NME’s relaunch issue, fronted by Rihanna, generated its biggest advertising revenue in 10 years. Since the revamp everyone from Justin Bieber to Bloc Party have graced the front page.

NME unveils Making a Murderer-style Kanye West cover as it reaches highest ever circulation added by newsroom on February 12, 2016
View all posts by newsroom →