By newsroom on July 24, 2017Comments Off on Rufus Leonard creates new visual identity for new holding company, The Ardonagh Group

The Ardonagh Group brings together five leading businesses in their fields to create a smart new vision for the insurance industry. Autonet, Chase Templeton, Direct Group, Price Forbes and Towergate are active across distribution, wholesale, underwriting and insurance services. Together they form the principal diversified and independent broking and underwriting group in the UK. 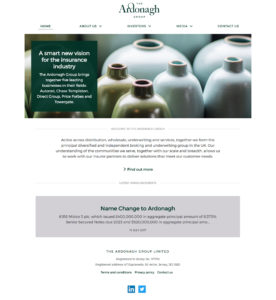 Rufus Leonard’s Executive Creative Director, Carlo D’Alanno explained that the agency was keen to ensure the new identity harnessed and embodied the experience and expertise of all of the companies that make up the group. The holding company is made up predominantly of British companies and has a global reach – this is reflected in the identity’s ‘decidedly British’ design cues, such as the use of a racing green colour.

For Rufus, it was a whirlwind project with tight timelines. The process of coming up with a name and trademarking was with the holding group. Once a name was decided upon, Rufus were tasked with creating a logo and identity quickly. Within a week, 6 logos were presented, from which one went on to be chosen. The chosen logomark was created and crafted with a distinct ligature. 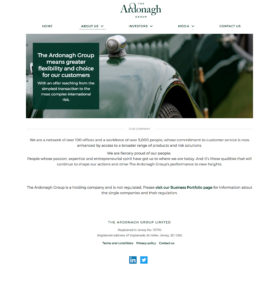 Building upon this work, Rufus had a further couple of weeks to build on the identity work. This included creating top level brand guidance capturing the colour palette, typography, photography style and stationery. For the launch a range of collateral was created including templates for internal communications and a set of bespoke printed stationery, such as business cards using classic foiling techniques.

To complete the brand experience, Rufus Leonard were also asked to bring the brand online, creating a full design for the website that was then handed over to the Ardonagh team to build. 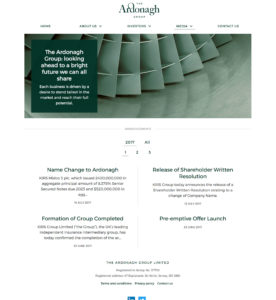 The holding company and website have both launched but this is only the first step. Iain Millar, Managing Partner, Innovation at Rufus Leonard, said that it is has been a thoroughly enjoyable experience working with the whole team. “It’s been great, we’ve had an intensely collaborative relationship from day one, and that’s how we’ve been able to achieve all this in the timeframe. We’re really excited about what’s to come too!”

Sharon Hough, Director of Strategy and Proposition, Ardonagh said: “Finding a unique company name and creating a strong identity for a new holding company is no mean feat, so we’re delighted with the look and feel of The Ardonagh Group. Working closely with the team at Rufus Leonard and utilising their expertise, we’ve been able to bring to life not only the British Heritage aspect, but also the elements of strength, resilience, insight and the power of the group coming together. The end result speaks for itself and we’re looking forward to continuing our relationship with Rufus Leonard as we move forward.”