By newsroom on July 3, 2015Comments Off on The Economist bugs Londoners with free insect ice cream 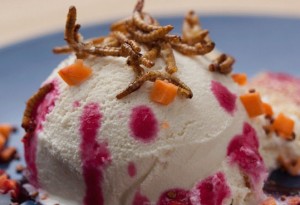 The Economist is offering Londoners a free sample of insect ice cream as part of a new experiential campaign designed to tempt new subscribers.

Containing actual insects the tasty iced treat is perfectly timed to coincide with a recent heatwave and is intended to support the magazineâ€™s long-standing enthusiasm for insect consumption as a ready source of protein to feed a burgeoning global population.

Taking to the streets on a branded ice cream delivery tricycle today The Economist team will offer punter s a choice of flavours including Choc Hopper with real grasshopper chunks and Scurry Berry with a mix of insect parts.

Marina Haydn, SVP of circulation and retail marketing for The Economist, said:

“Experiential marketing approaches are being employed by The Economist as a core element of our global subscription marketing strategy. It is our way of bringing The Economist to potential readers in the real world, real time – and creating a content-laced experience that has been a journey to an area outside of the usual comfort zone. We think this particular story about insects is the kind of mind-stretching material that our globally curious target audience will find particularly interesting, and hopefully, tasty as well.â€

In an editorial piece last September The Economist made a case for an insect diet by citing the twin challenges posed by a projected increase in the global population to 11bn by the end of the century and the impact of climate change on agriculture.

The Economist bugs Londoners with free insect ice cream added by newsroom on July 3, 2015
View all posts by newsroom →