By newsroom on September 1, 2015Comments Off on UFC Champion Ronda Rousey Brings a Knockout Breakfast to New Carl’s Jr. Ad 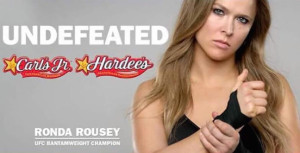 Fresh off of an impressive, and record-breaking, championship win and set to star in a film based on her own autobiography, Ronda Rousey is now adding commercial star to her list of accomplishments.

The ad focuses on the fighter who’s known for her toughness – first as she stares intimidatingly at the power-packed breakfast sandwich, then revealing her sweeter side as a massive bite filled with cinnamon, sugar, and savory meat and eggs cracks a smile on her face.