By newsroom on July 24, 2017Comments Off on America’s Wild Horses Become Unicorns to Fight a No Sense Slaughter Ban

Former global creative director of Mother London, Sasha Markova has launched a new Los Angeles based company called Gangs of Kosmos, and taken on the wild horses of America as their first client. They are possibly the first agency ever to represent animals directly.

The American wild horses are in trouble. A lot of them still live freely on public lands, but the cattle industries and energy companies are pushing them off the land for private interests. 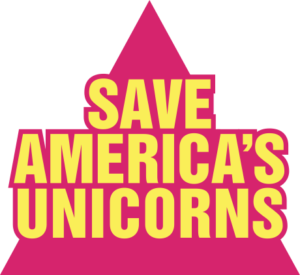 On July 18, a crucial moment happened when The House Appropriations Committee voted to permit the shooting of healthy wild horses and burros, lifting a historic No Sense Slaughter ban. Now the bill is about to be voted on by the Senate Appropriations Committee, before they go off for summer recess on August 5. If the ban is lifted, America could lose its status as a non-horse meat eating nation.

In response to this emergency, Gangs of Kosmos has launched a campaign for the horses, Save America’s Unicorns.

“We’re shifting the conversation with magic and fantasy to engage a whole new generation of wild horse lovers,” said Markova.

The campaign asks wild horse advocates to call and write to Capitol Hill to save America’s unicorns. It sates on the campaign website: “If we don’t do something now, America’s wild horses will soon be as mythical as the unicorn.”

The campaign was made with a new kind of creativity. “We pulled in a great gang to do this,” revealed Markova. 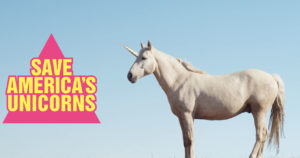 “This work represents a different kind of creative shift happening in the industry,” added Markova. “Creatives are collecting together to make work they really believe in that can shift the story happening in the world right now. If you can connect a creative to that, they will go all out for you and, to overturn years of bad advertising karma selling chocolate bars, they will probably give you their best work.”

Gangs Of Kosmos bills itself as a purveyor of stories from a new paradigm, where humans are more connected to the kosmos around them and don’t see saving the world as an abstract chore, but intrinsic and intuitive in their DNA.

If you can’t rely on an animal telepath, Gangs of Kosmos recommend you go to the Robert Redford/Elle Fanning favourite wild horse conservation organisation, Return To Freedom for further information.

America’s Wild Horses Become Unicorns to Fight a No Sense Slaughter Ban added by newsroom on July 24, 2017
View all posts by newsroom →