BBD Perfect Storm has been appointed by the Greater London Authority to create a campaign to let Londoners know what is being done to help tackle London’s housing crisis.

Using the brand message ‘Building a London for Everyone’ to create an on-going conversation, the campaign focuses on real Londoners and brings their stories to the fore. 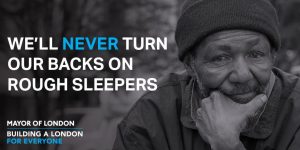 The campaign launched focusing on London’s rough sleeping population and comprises print, OOH, digital and social activity on Facebook and Twitter. It aims to raise awareness among Londoners of how they can help people sleeping rough in the capital, and of the vital services that help rough sleepers to find a permanent path off of London’s streets.

The GLA will also create an ‘always on’ online hub providing updates so Londoners can see the progress being made and policies that they can benefit from.

The agency, which is on the GLA roster, picked up the business following a competitive pitch.

Jason Foo, the chief executive of BDD Perfect Storm, added: “Londoners have made clear that housing is their most important issue, so it is a privilege to develop this campaign in communicating the action the Mayor is taking to help Londoners and ‘Build a London for Everyone.”