By newsroom on June 4, 2015Comments Off on Blippar hires Omaid Hiwaizi as part of expansion plans 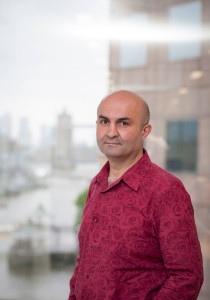 Omaid Hiwaizi, the UK chief strategy officer at Geometry Global, has been hired by Blippar as its first President of Global Marketing.

Hiwaizi will be responsible for expanding and transforming the marketing efforts of the leading image recognition and augmented reality app and grow consumer adoption. He will initially focus on the UK and USA, currently where Blippar has the largest installed bases.

Consequently Hiwaizi is calling a digital media agency pitch, with an ultimate goal of achieving 100 million users. This will be Blippar’s first formal media agency relationship with a significant initial media budget. Hiwaizi is running the pitch with the UK and USA local leadership.

Ambarish Mitra, Founder and Chief Executive Officer of Blippar, said: “As Blippar continues the evolution of its innovative technology platform and breaks into the emerging category of visual discovery, we are excited to expand to our world-class team. Omaid will continue on our rapid growth track globally and help us move forward in realizing our vision to make the world blippable.”

His appointment is one of three senior hires just made by Blippar and he joins Ariff Quli who has joined as Chief Commercial Officer, North America and Xuejun Wang who has joined as Vice President of Infrastructure.

As the founder of two agencies and the force behind the transformation of several planning departments across brands worldwide, Hiwaizi brings a diverse mix of marketing expertise to Blippar. Before joining Geometry Global, part of the world’s largest activation network, he worked as Planning Director at both SapientNitro and Chemistry and was a Founder and Planning Partner at Crayon.

Speaking about his appointment, Hiwaizi had this to say:

“My appointment comes off the back of recent Series C investment, which has enabled Blippar to change the game in Image Recognition from just recognising brands to objects in the world (eventually all objects), and provide information and inspiration to fulfill people’s curiosity, in the moment. This means that there’s a requirement to significantly increase commitment to consumer marketing. Previously Blippar focused on tech and brand/agency marketing – leaving consumer marketing to the brands.”

Blippar hires Omaid Hiwaizi as part of expansion plans added by newsroom on June 4, 2015
View all posts by newsroom →