By newsroom on June 7, 2018Comments Off on Boy and His ‘Snuggley’ are Inseparable in New Bank of Ireland Campaign by TBWA\Dublin

For most people, their first home won’t be their last. TBWA\Dublin’s new home campaign for Bank of Ireland understands that change is inevitable. But whether people are moving in or moving on, the brand’s latest film reassures them they’re not alone.

‘Snuggley’ is a heart-warming TVC that follows a young boy as he experiences new surroundings throughout his childhood. It shows the journey of a family through the eyes of a child and his ever present cuddly toy rabbit, ‘Snuggley’. His ‘Snuggley’ becomes the one constant as he moves home, welcomes new siblings, gets a dog, and makes and leaves friends. Through this comforting sentiment, Bank of Ireland says it’ll stay by their customers’ side, ‘Wherever you go’. 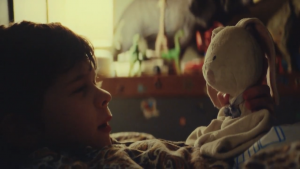 Shot in Dublin over four days, the beautifully-captured TVC is directed by Independent’s Gary Freedman, who is responsible for Cannes-Lions-winning commercials such as ‘When You Drink, Never Drive’ for Heineken and ‘Lift 90’ for HSBC, as well as his work for brands such as Volkswagen, Nike, Fosters, IKEA and Doritos. The film features the track, ‘Follow You, Follow Me’ by Genesis, which has been rerecorded by up-and-coming Cork singer, Maria Byrne.

TBWA\Dublin developed the campaign to promote a range of benefits for customers looking to buy a new home. Mark Nolan, Chief Strategy Officer from TBWA\Dublin comments: “Buying one house for life isn’t relatable to a new generation of consumers and many people will probably move home a number of times in their lives. To develop a campaign that really resonates with the public, we wanted to acknowledge this reality whilst highlighting the importance of having that one constant support throughout.”

The campaign will run across TV, OOH, Radio, Cinema, VOD, Digital, Native Content, Social, Owned Media and One on One. It will be supported by a PR campaign and a series of nationwide events.

Boy and His ‘Snuggley’ are Inseparable in New Bank of Ireland Campaign by TBWA\Dublin added by newsroom on June 7, 2018
View all posts by newsroom →