By newsroom on June 18, 2018Comments Off on BrandCap creates TV campaign for launch of Radisson RED Glasgow

Radisson RED, Radisson Hotel Group’s upscale hotel brand that aims to inject new life into hospitality through a focus on informal services, the latest technology, and bold design, has landed in Glasgow. To mark its arrival the hotel has launched its first TV ad campaign, created by BrandCap.

Glasgow is the fifth location for the brand, which also has hotels in Campinas, Minneapolis, Cape Town and Brussels. The city is famed for its cutting-edge music, fashion and arts scene, which fits with the brand’s positioning around art and design.

The ad’s creative therefore centres on the amazing location of the hotel (near world class venues including SSE Hydro and Armadillo) and its design-led interiors including the bold wallpaper designed by legendary Glasgow comic artist, Frank Quitely. It also features The RED Sky Bar which is Glasgow’s newest rooftop bar, and, Baxter, the hotel’s Boston terrier who cordially invites other canine friends to stay. 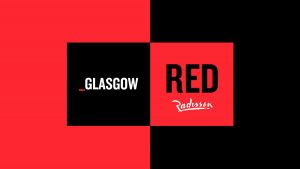 The ad will run for a number of months on STV across 36 daytime, 21 peak time and 4 late night slots, equivalent to c. 200 TVRs.

Steve Manfield, VP Marketing, Radisson Hotel Group commented: “The team at BrandCap did a great job! We’re delighted by the ad and of course the fact that Baxter made the cut! Its strong creative and emotive soundtrack engenders a deep connection with our potential guests and captures and portrays the brand and our positioning perfectly.”

Sophie Jurkiewicz at BrandCap added: “Working with the team at Radisson RED has been crazy and amazing! We think the ad is visually arresting, fun, vibrant and really standout. Not your usual hotel TV campaign!”

BrandCap creates TV campaign for launch of Radisson RED Glasgow added by newsroom on June 18, 2018
View all posts by newsroom →