By newsroom on September 4, 2017Comments Off on Charity urges US chemical giants “Don’t Bury Bhopal”

A $130 billion corporate mega-merger is the target of a hard-hitting new campaign by UK charity The Bhopal Medical Appeal, which cares for survivors of the world’s worst industrial disaster.

Created by Soul, the campaign uses a simple animated film to combine the corporate logos of Dow Chemical and DuPont. As the two logos merge together, they grow in size to fill the screen, forming a new logo that spells the word “DoNT”.

The end of the film reveals the strapline “Don’t bury Bhopal”.

The work encapsulates widespread anger over Dow’s stonewalling of victims of the horrific 1984 gas disaster in Bhopal.  Critics say that, ahead of an August 31st merger, both Dow and DuPont are deliberately hiding ongoing criminal, civil and environmental liabilities from shareholders.

Controversy has surrounded the treatment of Bhopal survivors ever since Union Carbide’s pesticide factory released a huge cloud of toxic gas into the heart of the Indian city. More than half a million were exposed, and an estimated 25,000 people have died over time. 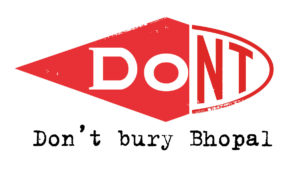 Toxic wastes dumped around the abandoned factory have since polluted local drinking water with poisonous chemicals. Today, the city suffers an epidemic of cancers and birth defects.

Dow Chemical completed a $9 billion merger with Union Carbide in 2001. European regulators cleared its proposed merger with DuPont in May.

“Dow and DuPont’s merger will create the world’s largest chemical company, but it could also bury the world’s worst chemical disaster beneath a mountain of corporate red tape,” said Colin Toogood of the Bhopal Medical Appeal. “New generations of Bhopalis are sick and dying. If enough people raise their voices together, Dow and DuPont will no longer be able to ignore their suffering.”

Shaun Moran, the founder and creative director of Soul, said: “Our brief was to get the message across in a short, quick, and simple fashion. The idea does just that. We’re using this merger to create the simple message: ‘DoNT bury Bhopal.’”