By newsroom on March 15, 2013Comments Off on China’s Department Store Retail Market Doubles in Value Over Past Six Years 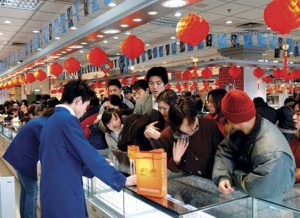 While department stores in China have faced ever more increasing competition from other formats and retail channels in recent years – new research from Mintel reveals just how much this sector has flourished.

Indeed, around a third (30%) of urban Chinese shoppers now shop at a department store once a week or more, with a further quarter (24%) shopping in them 2-3 times a month.

“Department stores in China have not only survived within the context of the country’s recent rapid economic development, but many have flourished, including several department store chains. Yet the market space they fill increasingly has to compete with other retail formats, such as specialist chains, hypermarkets and supermarkets, and growing numbers of new destination shopping malls and retail parks. This is making the competitive landscape increasingly difficult for department stores, and much harder for them to sustain their levels of interest among China’s shoppers.”

“However, the department stores sector is continuing to undergo adaptation to the changes in the Chinese retail market brought about by the rapid growth in the domestic consumer economy. This is a process that will need to continue as the domestic economy grows, the retail market diversifies and the influence of online retailing becomes stronger,” Matthew continues.

“Department stores cannot rest on reputation alone, and need to continually innovate in order to sustain consumer interest. In such an increasingly competitive market, it will be the companies that are quick to adapt and innovate that will survive, while many stores and chains that fail to keep up with the changes will almost certainly go under.”

Driving this growth, Clothing tops the list of items purchased at department stores with 92% of those who shop in them purchasing a clothing item. This is followed by Accessories (77%), Personal Care Products (71%), Houseware Products (60%) and Footwear (72%). In addition, Menswear items (68%) just edges Womenswear Items (67%) in terms of next most purchased items.

Over the past six months, half (50%) of consumers who shopped at online department stores purchased shoes, almost one in two (48%) womenswear and 45% menswear – a further 35% purchased cosmetics, skincare and fragrances and 35% sports clothing, footwear and equipment.

Highlighting the importance of online apparel to the e-commerce market, Mintel’s research also reveals that online apparel retailing as a proportion of total China apparel market value has increased market share from just 2% in 2008 to 21% in 2012 – growing marketing value from £18 billion in 2008 to £352 billion over the same period.

“Online retailing is growing fast in China, and while online retailing offers opportunities for department stores to reach more consumers, they need to find a distinct niche within the online market. Focusing on the service reliability and brand quality of the core lines that make their physical stores successful can translate into added security and trustworthiness for online consumers.”

China’s Department Store Retail Market Doubles in Value Over Past Six Years added by newsroom on March 15, 2013
View all posts by newsroom →