By newsroom on August 8, 2018Comments Off on Hydrogen named as Subway’s Scottish agency 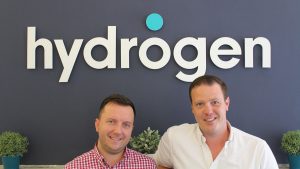 Glasgow specialist social media agency Hydrogen has celebrated its second anniversary with the news that it has tripled its turnover year-on-year, as well as having won over five new clients.

Having started as a three-person company sat around a kitchen table in Hamilton, the past 12 months has seen Hydrogen being appointed by clients such as sandwich brand Subway, move office, expand its team to nine members, and triple its turnover.

Subway Scotland is one of several clients that Hydrogen has won in the past year, with charity Worldwide Cancer Research, automotive video service CitNOW and whisky brand Finnieston Distillery Company all appointing the Glasgow-based agency.

Mike Scott, MD and co-founder of Hydrogen, said: “The appointment by Subway to handle its Scottish campaigns is hugely exciting for a company which hasn’t even celebrated its second birthday yet, and we can’t wait to get started. If there are two things the team at Hydrogen know, it is social media and food, so this is a perfect fit.”

The appointment will see Hydrogen handle day-to-day content as well as campaigns for the franchisees across the country.

Shahid Sadiq, Regional Developer for the Subway brand, said: “We were looking for work to be delivered to a Scotland only audience, so it made sense that it would be produced and delivered within Scotland.  Hydrogen really impressed us from the start and we’re looking forward to getting things going with them.  As a specialist social media agency based in Glasgow we feel that they are best-placed to deliver the local messaging we feel is required onto the platforms that they specialise in.”

As a specialist agency, Hydrogen covers a whole range of social media services, including strategy, content creation, video and animation design, community management and social media insights and analytics. Moving into its third year of operations, Mike plans to continue to grow the business, including looking to move to a larger office, increase staff numbers and expanding the client roster.

Hydrogen named as Subway’s Scottish agency added by newsroom on August 8, 2018
View all posts by newsroom →