By newsroom on May 10, 2017Comments Off on McDonald’s win the YouTube FAB Brand / Marketer of The Year Award at The 19th FAB Awards 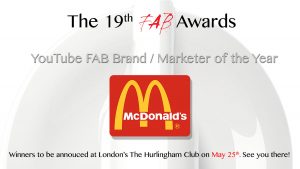 McDonald’s have been named The YouTube FAB Brand / Marketer of The Year at the 19th edition of the International Food and Beverage Creative Excellence Awards (The FAB Awards), bagging an impressive nine nominations across the various categories.

The world’s largest restaurant chain, who last won this title in 2013, will be handed the award on the 25th of May at the exclusive Hurlingham Club in London, along with the other winners at The 19th FAB Awards.

This is the only Award that is publicised in advance and is based on the number of nominations that McDonald’s achieved during the judging sessions.

The calculations included the brand’s performance at both the Creative Awards and the Effectiveness Awards.

Emily Somers, VP Marketing & Food Development, McDonald’s Restaurants Ltd. said: “We are thrilled that McDonald’s has been recognised as the FAB Brand of the Year for 2017. The award is down to the work of a lot of dedicated, hardworking and passionate people, both in our marketing team and at our agency partners. Our internal team works seamlessly with their agency counterparts driving targeted, creative and inspirational campaigns to deliver stories our customers want to hear. This is a huge accolade for everyone involved, I’m delighted!”

McDonald’s, who broke Mars, Incorporated’s two-year winning streak, were recognized for work done in the UK, Canada, Japan and Sweden.

The FAB Awards President N.Nayar said: “McDonald’s have achieved several nominations this year for outstanding projects across varied media channels. Their creative output has been truly phenomenal, coupled with scoring the highest number of points following our various judging sessions makes them very worthy winners of the YouTube FAB Brand / Marketer of the Year Award.”

The 19th FAB Awards will once again be supported by Google UK Ltd, with YouTube acting as the sponsor of both The Agency of the Year and The Brand of the Year Awards.

YouTube will also co-host the FAB Forum, which is a thought leadership session held at their St. Giles High Street venue, and acts as a precursor to The Awards Ceremony.

The FAB Brand / Marketer of The Year Award was introduced in 2013, and has previously been won by McDonald’s, KitKat and Mars, Incorporated.

All of McDonald’s nominated projects, along with the full list of finalists at The 19th FAB Awards can be seen here.

McDonald’s win the YouTube FAB Brand / Marketer of The Year Award at The 19th FAB Awards added by newsroom on May 10, 2017
View all posts by newsroom →