By newsroom on July 1, 2013Comments Off on Microsoft unveils Xbox Music on the web 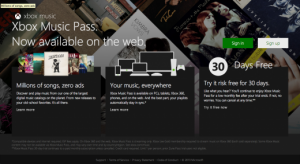 Microsoft has rolled out a web-based version of Xbox Music, which puts users’ music into collections and playlists.

The ad-free service allows users to go in to edit and add their playlists, with the results then synced.

The service is subscription only, although non-members can sign up to a 30-day trial, and has a now playing feature which allows users to control aspects such as volume and repeat.

Xbox Music Pass is currently available for PCs, tablets, Xbox 360, phones, and on the web.

Microsoft unveils Xbox Music on the web added by newsroom on July 1, 2013
View all posts by newsroom →