By newsroom on September 20, 2017Comments Off on New robotic companion Cozmo launches to the UK audiences

Consumer robotics and artificial intelligence (AI) company Anki, launched Cozmo, their incredible robot companion. Charming and mischievous, Cozmo is a real-life robot like you’ve only seen in movies, designed with fun and friendship in mind. 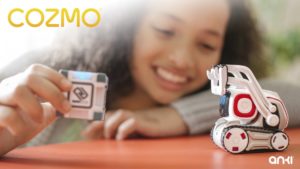 Anki founder Mark Palatucci said that Cozmo “Brings together technology, artificial intelligence, game design and cinematic wonder, Cozmo rewrites the rule book for consumer robotics. The level of depth, personality and interactivity is the cornerstone to why Cozmo has stolen the hearts of fans, and we’re excited for Cozmo to show the UK just what he can do.”

Cozmo’s emotions aren’t random. His unique personality, driven by powerful AI, is brought to life with complex facial expressions, a host of emotions and even his own emotive language. His vision system and sophisticated facial recognition software allows him to constantly scan his environment and recognise people. His eyes even light up when he sees a familiar face. Cozmo also comes with his own dynamic soundtrack that matches his mood and corresponds with the games and activities, elevating playtime to a uniquely cinematic experience.

Those seeking a rambunctious robotic sidekick with an extraordinary intelligence and astounding interaction can now get their hands on their own from September 15 for £199.99.

New robotic companion Cozmo launches to the UK audiences added by newsroom on September 20, 2017
View all posts by newsroom →