By newsroom on October 13, 2015Comments Off on Playboy to cease publication of ‘passé’ female nudity 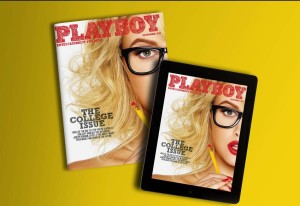 The new edict will come into effect from March 2016, when the title will pursue â€˜provocativeâ€™ female poses instead as part of a wider redesign â€“ although its Playmate of the Month feature will remain.

In other moves the magazine will appoint a â€˜sex-positive femaleâ€™ columnist as part of its drive to appeal to younger readers.

CEO Scott Flanders told the NYT: â€œYouâ€™re now one click away from every sex act imaginable for free. And so itâ€™s just passÃ© at this juncture.â€

The Playboy website has already been given a makeover, with x-rated content expunged to make it safe to read at work.

The new-look magazine will be rated PG-13 and is an effort to stem a steady decline in readership which has slumped from 5.6m in its 1970s heyday to just 800,000 today.

Playboy to cease publication of ‘passé’ female nudity added by newsroom on October 13, 2015
View all posts by newsroom →