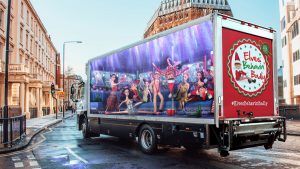 Mischievous elves can be seen wreaking havoc on the sides of lorries up and down the country in the run up to Christmas, kicking off a major marketing and communications campaign to launch the new range of Elves Behavin’ Badly.

Toy manufacturer PMS International has covered its entire fleet of lorries with images of Elves Behavin’ Badly in different playful set-ups. One debaucherous design sees a group of rowdy elves creating chaos on board a Christmas party bus as they let loose with female companions, plenty of booze and a stripper pole. Other lorry images include a group of elves lined up in an identity parade while another sees a set-up of elves planning mischief as they sit behind bars. 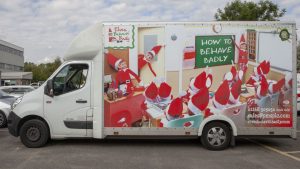 The lorries will clock up more than one million road miles between them as they travel nationwide between now and Christmas.

PMS International hired award-winning creative agency Taylor Herring to lead the campaign and build on the brand fame of the break-out doll range, which sold over 2,000,000 elves in the run up to Christmas 2017, making it one of the biggest selling brands of the year. This year’s creative campaign accompanies a new range of naughty elf products hitting UK shelves in November. 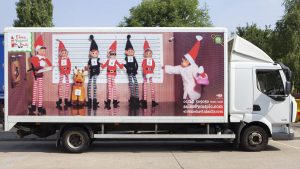 The campaign will push consumers to join in the social media phenomenon of parents sharing pictures of their badly-behaved elves in humorous set-ups overnight, with the aim of surprising their children in the morning.

The first Christmas advert for Elves Behavin’ Badly will launch online this year alongside a national fan photography competition. 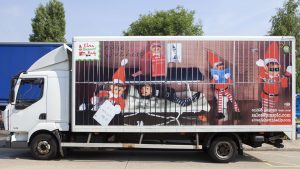 Paul Beverley, managing director at PMS International Group PLC, said: “Elves are the new must-have Christmas companion and Elves Behavin’ Badly are leading the pack with their cheeky charm and mischievous antics. The new Elves Behavin’ Badly livery will make PMS’ lorries some of the most recognisable on the roads. We are sure that the images of our elves will make people smile, and will become instantly memorable to all those who see them out and about.”