By newsroom on June 19, 2015Comments Off on Proximity Madrid & Stop Desahucios launch a social movement #NoMoreEvictions

In 2014, the situation was critical, more than 20,000 families in Spain had lost their homes because they couldn’t pay their mortgage and despite being evicted remaining in debt to the bank.

“Spain is the only country in the world where this occurs. Neither the media nor the Government showed any interest in fixing the problem. Our objective was to make society aware of and empathetic to the issue to amend this injustice. How? Through a ‘media’ that would put our message directly into everyone’s hands…euro bills. We used a rubber stamp as a protest to spread our message,” commented Proximity Madrid.

Proximity and Stop Desahucios started with a universal insight. Where do people go when they are left without a home? Colloquially speaking it is said they go and live ‘under a bridge’ and the creative agency realised that every single euro bill has a bridge printed on it.

How can you place an evicted family under a bridge directly and symbolically? By creating a rubber stamp on which this family was represented and asking people to stamp it under the bridges on every euro bill. 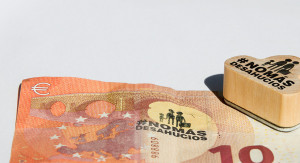 Proximity’s appeal was made through the hashtag #NoMasDesahucios and moved on social networks, from despatches to opinion leaders and a web site. In less than 24 hours a social movement had been created in the streets, on social networks and in the media. Currently the movement continues advancing organically.

The integrated campaign reached an estimated audience of 80.1 million. 20,000 rubber stamps ran out in 24 hours. Once the stocks of stamps ran out, many people ‘drew’ their own version of the stamp on euro bills. There were thousands of euro bills stamped. It got more than 120 media appearances, including on the highest rating TV programs. There were more than 100,000 related tweets. Return on Investment was €1,217,220.

But the most importantly: Two weeks after the campaign launch, the Spanish President announced the ‘Second Chance Law’ to stop evictions.

Additionally, the other political parties included similar policies in their electoral programs. With one little rubber stamp we have been able to make a more just law possible.

The campaign also recently bagged a silver and a bronze at the Cannes Lions Advertising Festival.