By newsroom on March 7, 2018Comments Off on ROTHCO Highlights the Gender Page Gap for International Women’s Day 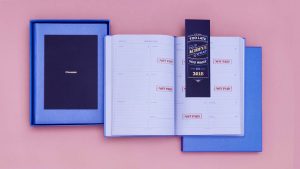 In recognition of International Women’s Day, creative agency ROTHCO have launched a special campaign to help shine a light on pay inequality and the silence which is fuelling it – ‘The Page Gap’.

The agency, part of Accenture Interactive, has developed a collection of bespoke Smythson diaries to send to women of influence in Ireland, the UK and beyond on International Women’s Day, March 8th.

These special diaries include a harsh reality. Seven weeks of the diaries are marked with a large red ‘unpaid’ stamp creating a page gap that mirrors the gender pay gap. Seven weeks is the average number of weeks that women effectively work unpaid relative to their male colleagues.

Female Creative duo at ROTHCO, Elaine Joyce and Orla Byrne, comment: “The last 12 months have been transformative for women, as evidenced by the #MeToo and ‘Time’s Up’ movements. All around the world, women have been emboldened to fight to have their voices heard louder than ever. Despite all of this progress, one issue remains relatively unspoken about: the gender pay gap. There is a certain silence surrounding it that makes it easier to pass over. So, we wanted to make sure it was somewhere difficult to pass over, like in the pages of your diary. We needed to make a statement that overtly showed the seven-week disparity.”

The diary includes a bookmark which is placed on March 8th with the message: “It’s not too late to achieve what you want in 2018.”

On the reverse there is a clear prompt to break the silence on the gender pay gap: “Like equal pay. Due to the gender pay gap, women work for seven weeks of the year unpaid relative to their male colleagues. On this International Women’s Day we’re asking women to speak up about the pay gap. Talk to your boss, chat to your colleagues, ask the ‘awkward’ questions. Silence is fuelling the gender pay gap.”

The message urges these women of power to share their support for closing the gender pay gap using #thepagegap.

Alan Kelly, Executive Creative Director at ROTHCO comments: “We wanted to give people a sense of the magnitude of the problem. Women have a gap in their earning year that needs to be shown, talked about and stopped.”

Mark #thepagegap in your diary, share your support online, and help to break the silence that is fuelling the gender page gap.

ROTHCO Highlights the Gender Page Gap for International Women’s Day added by newsroom on March 7, 2018
View all posts by newsroom →