By newsroom on November 4, 2013Comments Off on Tesco to scan customers’ faces in ad-targeting scheme 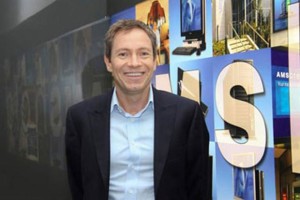 Tesco is set to install hundreds of screens that will scan people’s faces as they queue at tills, which will determine their age and gender, to deliver tailored ads.

The scheme will be delivered by Lord Alan Sugar’s company Amscreen, in a five-year deal that will roll out 450 of the “OptimEyes” system in Tesco petrol stations.

The technology decides whether a person is male or female and groups them into one of three possible age groups, in order to serve them the most appropriate advert.

Tesco said the scanners do not store data and have already been used by other petrol station owners. The screens, which adjust its adverts depending on the time and date, as well as monitoring customer purchases, are predicted to reach more than five million adults a week.

The ads on screen run for up to 10 seconds on a 100 second loop, and provide ad-funded branded content based around big events such as sporting tournaments.

Lord Sugar’s son Simon, chief executive of Amscreen, told The Grocer: “Yes, it’s like something out of Minority Report, but this could change the face of British retail and our plans are to expand the screens into as many supermarkets as possible.

“Brands deserve to know not just an estimation of how many eyeballs are viewing their adverts, but who they are too.”

He said: “The ability to tailor content based on time and location means this can be extremely useful and timely for interacting with our customers.”

Tesco to scan customers’ faces in ad-targeting scheme added by newsroom on November 4, 2013
View all posts by newsroom →