By newsroom on November 22, 2017Comments Off on Wealthy Consumers Turn to International TV Channels in an Era of Fake News 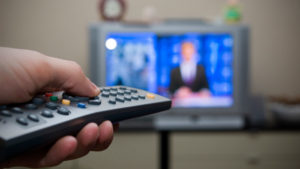 An independent research survey carried out by IPSOS amongst 28,000 Affluent Europeans has identified that these wealthy consumers are turning to international TV channels for their source of trustworthy and impartial news.

(Average TV sentiments among daily viewers of each channel measured who have rated channels 6 or more out of 7.)

The research shows that these values are felt even more strongly amongst top earning European consumers – particularly amongst C-Suite responders and even more so amongst individuals with a household income of €250k+ who rate international TV channels at least 10% more highly than the average for all attributes: 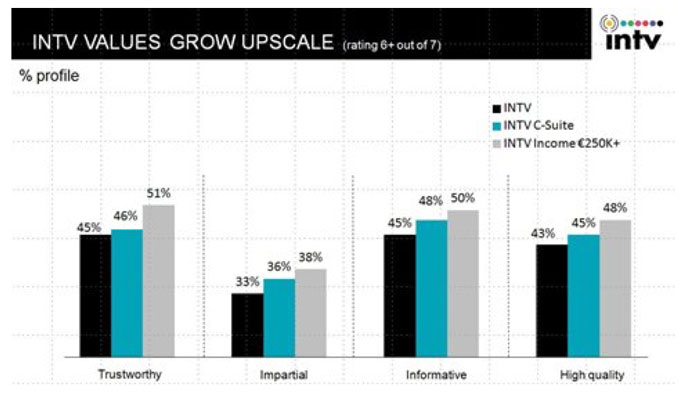 Sonia Marguin, Head of Research at Euronews and Chairperson at inTV, comments, “With so much instant information, clutter and fake news, time-squeezed affluent consumers are being more selective about which media brands they use. They really value the impartial content provided by international TV channels and so are more likely to engage with them than national TV brands. That’s why, when looking at the international TV channels within the inTV group, we reach 86% of C-Suite Europeans.”

The trust and esteem that upscale consumers put into international TV channels also represents an opportunity for advertisers who, with issues around brand safety and ad fraud, are demanding more control over where their ads are being seen and who is seeing them.

International TV channels offer them a quality environment in which to appear, along with a much more senior and upscale target audience of wealthy consumers such as C-Suites, high income earners, owners of luxury goods and frequent flyers. The target audiences below register an index advantage at least 49% higher for viewers of international TV channels compared to non-viewers:

Viewers of international TV channels also appear to be more engaged consumers, having 44% more conversations about the brands they see advertising on international TV network compared to non-viewers.

The Affluent Europe universe accounts for the Top 13% of all adults, within the 18+ age group. The European top 13% is based on the main income earners in the top 20% households in each of the 21 survey countries, measured by household income. The Affluent database contains approximately 28,000 respondents representing 52.2 million wealthy Europeans.

Wealthy Consumers Turn to International TV Channels in an Era of Fake News added by newsroom on November 22, 2017
View all posts by newsroom →