By newsroom on November 28, 2018Comments Off on Wolford reinvents itself with ‘True Characters’ campaign by DDB & Tribal Amsterdam

To stay relevant in the ever-changing world of fashion, leading Austrian lingerie and hosiery brand Wolford, asked DDB & Tribal Amsterdam to help them find a new strategic direction and a contemporary style. 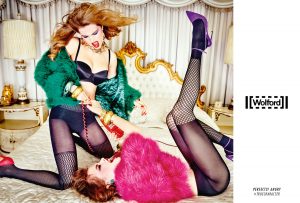 The result is a new global campaign for Spring Summer 2019 titled ‘True Character’. A multimedia campaign – shot by iconic photographer Ellen von Unwerth – under the creative direction of Joris Kuijpers.

In the new campaign, DDB & Tribal Amsterdam builds on Wolford’s rich history as a luxury brand, while marking a departure from the brand’s previous tone and style. The campaign was made to appeal to younger target groups worldwide, without alienating the current target groups.

Gwenda van Vliet, Global Brand & Marketing Director at Wolford said: “We wanted to stay true to the high-quality products we are so proud of. But we found that we were seen as an aloof, formal and emotionally disconnected brand, aimed at a mature consumer. In order to grow, we needed to change. Because the world has changed. More than ever, brands need to be relevant to younger consumers who are looking for brands that really have something to say. Thankfully, Wolford has a lot to say.” 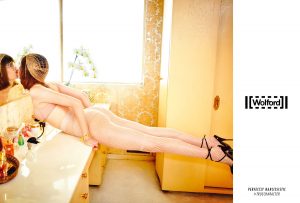 Joris Kuijpers, Executive Creative Director of DDB & Tribal Amsterdam added: “The idea behind the campaign is actually quite simple but also true. Wolford has great top-quality (shaping) products that make every woman look great. No matter how they feel. It seems as if nowadays, especially because of social media, everyone is expected to always be happy and relaxed. But that’s not how the world works, of course. Sometimes, we just aren’t at our best. This campaign plays with the beauty of such imperfections. With Wolford, you can look fantastic – even when you’re disappointed, desperate, angry or jealous. To add a little playfulness, we executed everything in a way that was a bit over the top and theatrical.”

Throughout the last 60 years, Wolford has become known for its iconic imagery, some of which was shot by legendary photographer Helmut Newton. To bring the ‘True Character’ campaign to life, DDB & Tribal Amsterdam joined forces with renowned photographer Ellen von Unwerth, who is famous for her portraits of strong, sexy, confident and independent women.

Joris explained: “In this campaign, we needed powerful emotions and characters. In my opinion, Ellen von Unwerth captures these expressions better than anyone else. In a lot of today’s (high-end) fashion photography, you see that the emotion is completely squeezed out of the model. I think that’s a shame, and all those campaigns look alike. That’s why it was such fun to work with Ellen. Not only is she one of the best photographers in the world, she is also a lot of fun. She has an enviable amount of energy and experience, an amazing eye and a contagious sense of humour. Also, she wants every picture to tell a little story. As a result, she, Joris Kang’eri and I were soon on the same wavelength, which left us with room to play and improvise. In all, we managed to shoot an amazing 60 photos and 40 videos, plus a number of GIFs and boomerangs.” 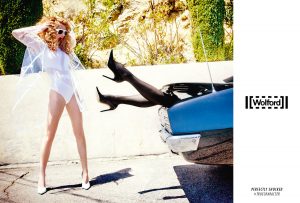 With a media mix of print, online, social, in-store and influencers, the ‘True Character’ campaign will be targeting major European cities (including London, Paris, Milan, Amsterdam and Berlin), as well as New York, LA and Shanghai.

The hashtag #truecharacter is used throughout the campaign and collection to implement a call to action, with hashtags linked to moods such as angry, grumpy, clumsy, bored and charming, targeted to specific times and days of the week. Clicking on a product will lead directly to an online retailer or the Wolford homepage.

Wolford reinvents itself with ‘True Characters’ campaign by DDB & Tribal Amsterdam added by newsroom on November 28, 2018
View all posts by newsroom →