By newsroom on November 16, 2015Comments Off on 23red brings the Bluewater reindeer to life in Christmas TVC

Creative agency 23red has unveiled a Bluewater campaign celebrating ‘‘Christmas is here. Make it magical’ to highlight the yuletide festivities available at the retail and leisure destination in 2015.

A 30 second TV ad is supported by press, digital, social, radio, outdoor, point of sale and in-mall media running throughout November and December in the south east area.

The campaign idea encourages us to leave our world-weary adult lives behind and to see Christmas through the eyes of a child once again, embracing the magic of Bluewater during the festive period.

The TV ad stars a wide-eyed six-year old girl and a CGI incarnation of one of Bluewater’s iconic, illuminated reindeer, who appear annually at Bluewater to signify the start of Christmas for thousands of visitors. 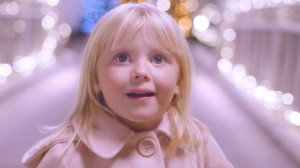 Sean Kinmont, Founding Partner – Creative at 23red, said: “As a grown-up we often lack that sense of nervous excitement at Christmas time. At 23red we’ve brought that back with the help of charming, computer generated magic, showing the moment a six-year-old’s dreams come true.”

David Wilkinson, Head of Marketing at Bluewater, said: “Christmas is such a magical time at Bluewater and the giant reindeer have become iconic symbols in recent years. We’re expecting over 27 million visitors this season and we hope that each one feels a sense of joy as they see the ads and begin their own festive traditions.”

23red brings the Bluewater reindeer to life in Christmas TVC added by newsroom on November 16, 2015
View all posts by newsroom →