By newsroom on November 1, 2018Comments Off on Absolut Begin Global Search for Next Artistic Collaborator

Absolut is launching the global Absolut Creative Competition in 20 countries across the world with the mission to find the next bold creative voice of the brand. The competition entries will be judged by leading creatives voices, with one exciting member already announced.

The competition aims to celebrate creativity and harness the power artists have to envision and create a better tomorrow. It launches globally on November 1st and artworks can be submitted until January 31st.

Over the last four decades Absolut has worked with over 550 of the world’s boldest artists including Keith Haring, Arman Armand, Romero Britto and Maurizio Cattelan, resulting in over 800 art pieces being created. Today Absolut is launching its biggest collaboration effort in the history of Absolut, encouraging creatives from all over the world to create expressions that bring alive what one of our brand beliefs mean to them. The beliefs are centred on creating a more open, equal and inclusive world and make up our creative platform ‘Create a Better Tomorrow, Tonight’.

As mentioned, the competition winner will be selected by a global jury as well as have their work amplified on Absolut’s social media and digital channels. They will also then have their work displayed on a globally iconic OOH site such as Piccadilly Circus, Times Square, receive a €20,000 cash prize, and be invited to the global announcement event in May 2019. 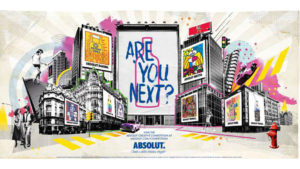 The first jury member to be revealed is Aaron Cezar, the founding director of the London based Delfina Institute, where over the last ten years he has positioned the Delfina Foundation as a meeting point and incubator of creative talent, forming partnerships with leading institutions internationally.

As detailed by Aaron, “I am excited to be part of the Absolut Creative Competition and I am inspired by its objectives to create a more open world through creativity. I have long observed how the arts, alongside other disciplines and creative thinking as a whole, can be a way of understanding some of the problems of the world and envisioning our potential to address them.”

Sina Neubrandt, Senior Global Marketing Manager says: “Creativity can spark conversation and drive change. This is why Absolut’s latest campaign celebrates the power that creativity has for making a real difference in the world. We’re excited to see the entries and celebrate the winner in May.”

The competition and campaign creative was conceived by Absolut. The film was directed by Oscar Hudson, featuring creative from BBH and is part of Absolut’s ongoing platform: ‘Create a Better Tomorrow, Tonight’.

Absolut Begin Global Search for Next Artistic Collaborator added by newsroom on November 1, 2018
View all posts by newsroom →