By newsroom on March 28, 2018Comments Off on Alexander Skarsgård is a Globetrotting Spy in Tumi’s Haute New Luggage Ad

No James-Bond-style courier-spy is complete without his beautiful but rugged suitcase, says a new five minute ad from luggage maker Tumi.

Alexander Skarsgård of True Blood and Big Little Lies fame plays a mysterious man of impeccable taste and considerable means in the moody fashion campaign from EP+Co. He embarks on a cloak-and-dagger mission assigned by a waitress at an outdoor cafe in Hungary. It takes him traveling to the farthest corners of the world and back. He totes a Tumi behind him the entire way.

goes to Italy, and then Washington state, then Mongolia. He moves by vintage sports car, speedboat, propeller plane, train and camel, to name a few. He dresses well, and seduces a gorgeous woman with nothing but a look (he is, apparently, the tortured haute equivalent of Apple’s Face ID). That, so he can surreptitiously photograph a map in her possession. Most important, he subjects the suitcase—one of the brand’s new “Latitude” models, and the point of the ad—to all kinds of abuses and indignities.

It gets squeezed between a hull and a dock. It rolls around in the back of a van. It rides on the back of a camel through a sandstorm. It get tossed unceremoniously into the dirt at the top of a remote mountain—home to a humble monastery. It survives all these trials, proving it is both luxurious and durable. You will be persuaded, the camera insists.

The ad is, in other words, a cross between a spy thriller and a perfume commercial with some product shots interspersed. Starting at $645, the carry-on-sized luggage warrants a relatively high-brow treatment. The brand does itself a bit of disservice, though by cramming in, early on, awkwardly dramatic footage of machines manufacturing the suitcase. It doesn’t give viewers enough credit—the later baggage cameos are more than plenty to get its point across. In fact, it’s more like a co-starring role. 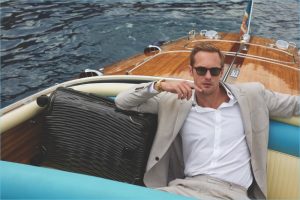 continually sets a high bar by engineering functionally beautiful products that can take on anything. It’s our job to find ways to demonstrate that in equally powerful ways,” says John Cornette, executive creative director and director of innovation at EP+Co. “For this project, our goal was to send one person around the world on a single degree of Latitude to fully demonstrate every aspect of this collection. The result was 21 days of continuous production, shooting in four countries with one bag.”

Cornette adds: “It took a lot of really talented people believing in doing something very unorthodox to make it all happen. Without someone like Alexander who is genuinely up for the adventure, and clients believing in every leg of the journey, it’s not possible. It’s really an idea that does the product justice. That’s what we’re most proud of.”

“With Tumi Latitude, we wanted to create a collection that offers the best in terms of innovation and aesthetic, but also functionality,” says the brand’s VP of global marketing, Heather Gorman. “We are consistently inspired by global citizens and their desire to push boundaries and perfect their journey. The new Latitude collection does just that, and more.” 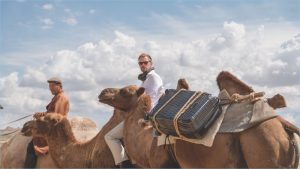 first blush, the spot—beautifully shot—is vaguely evocative of Mads Mikkelssen’s washed-out eight-minute Mediterranean send-up of gangster clichés for Ford. The willful opacity of the details in the Tumi ad, though—why the man has trekked around the globe, and engaged in romantic deception, and let a wispy blonde beard ravage his perfect face—may be a missed opportunity.

But in the end, it does one thing right. The female lead (if such little screen time can warrant such a title) turns out not just to be a sexualized foil, but the savvy, powerful victor—using nothing but a matchbook, she’s tracked Skarsgård back to the source, lying in wait across from the same cafe. After he’s journeyed so far, foolishly chasing some priceless object, there she is, ready to snatch the suitcase and whatever hidden treasure lies within.

Hopefully it’s worth it.

Alexander Skarsgård is a Globetrotting Spy in Tumi’s Haute New Luggage Ad added by newsroom on March 28, 2018
View all posts by newsroom →