By newsroom on February 22, 2018Comments Off on BETC and Canal+ encourage French football fans to pin digital voodoo dolls ahead of Le Classico

The French Classico (Olympique de Marseille VS Paris Saint Germain) will once again be broadcast live and exclusively on Canal+ on Sunday, February 25th at 9pm.

To hype this mega clash, BETC and Canal+ suggest an unexpected explanation for all those incomprehensible missed moves during the football games: what if it was all due to the supporters’ passion? 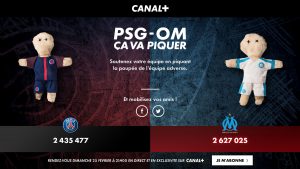 This original and off-the-wall film shows a PSG and an OM supporter in front of their TV-screens, taking turns in trying to influence the game by sticking pins in voodoo dolls.

A dedicated website launched at the same time lets supporters join the experience and sting a virtual doll of the rival team.

Unsurprisingly, the football mad and feisty French are going for it and before the actual game there is now a competition going on online, competing which doll gets pinned the most. The dolls have already been pinned nearly 3 million times.

BETC and Canal+ encourage French football fans to pin digital voodoo dolls ahead of Le Classico added by newsroom on February 22, 2018
View all posts by newsroom →