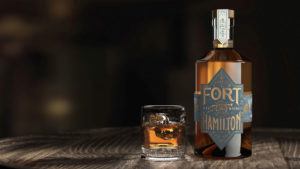 Alex Clark has big ambitions in the spirits category and approached Bulletproof with the opportunity to create a truly distinctive brand in the otherwise saturated world of craft and rye whiskeys. With a plethora of parity already in the market, Bulletproof was up for the challenge of creating a new rye whiskey that would stand out against the rest.

Bulletproof comments: “The craft movement has evolved beyond beer into the spirits realm, with sales of craft spirits projected to reach 25.6 million cases by 2020. We challenged generic craft codes and sought to disrupt the category with a new point of view, born from an authentic American story. 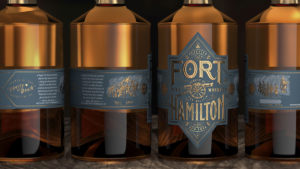 “Through our extensive research and immersion process, we identified Alexander Hamilton’s passionate spirit of defiance and rebellion as the inspirational platform for our new whiskey brand. After scouring historical documents relating to the man, we found it – Hamilton’s original uncompromising militia, the ‘Hearts of Oak’, who in 1775 orchestrated a daring raid in lower Manhattan.

“Capturing the raw, unabashed patriotism of the American Revolution, the Fort Hamilton design brings the era to life, with the detailed storytelling on the label echoed by the intricacy of hand crafted illustrations. The scene captures a real moment in Hamilton’s revolt against the British – a celebration of unconquerable spirit and a tribute to the art of war, with a depth of storytelling that makes Fort Hamilton distinct and unique in the category. 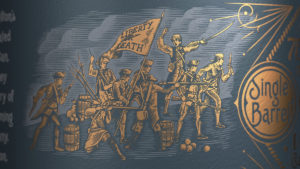 “From the outset, we knew that bespoke finishes and materials were critical in order to make Fort Hamilton truly stand out. The intricate detail of the meticulously crafted cannon and battle scene is brought to life with copper foiling against a blue-green background, borrowing from rye whiskey category codes, while also reminiscent of the American Revolution era.”

“The Fort Hamilton brand mark and typography were inspired by military insignia and signage of the time and flanked by filigree, with the challenger mindset and Hamilton’s untiring spirit reinforced by the rallying call for ‘Liberty or Death’.” 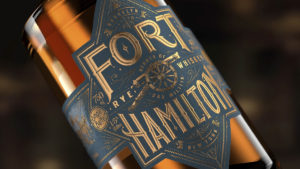 “The result is a whiskey brand that blends the old world of revolution with the new world of craft. The design encapsulates the bold, daring spirit seen at Fort Hamilton, while allowing the consumer to discover a new piece of the story each time they pick up the bottle.”

Alex Clark, founder of Alex Clark Spirits said: “The dedication and creativity of the Bulletproof team in bringing Fort Hamilton to life has been nothing short of inspirational. Their exquisitely crafted design already has retailers clamouring to stock the product, and their expert packaging knowledge ensured that the print and structural production processes felt effortlessly efficient. With such fierce competition all around, the spirits category itself can sometimes feel like a battlefield. Faced with that challenge, Bulletproof is the talented, tenacious band I’d always want by my side!”