By newsroom on May 3, 2018Comments Off on Cineworld launches its 2018 ‘Unlimited’ campaign by Twelve

The 80 second spot will premier in all 99 locations, including their newly refurbished flagship cinema in Leicester Square from Thursday 3rd May. The spot will also be shown on VoD formats 4OD and Sky, as well as YouTube and other online channels.

The new advert promotes Cineworldâ€™s Unlimited card, which enables customers to enjoy all-you-can-watch cinema for a fixed monthly price. The membership scheme launched 10 years ago and is now the largest cinema subscription program in the UK. 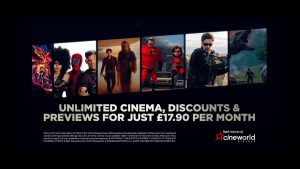 In addition to unlimited movies, the card unlocks a world of benefits, including discounts in-cinema on food and drinks and at partner restaurants, as well as access to advanced previews of upcoming films.

The advert takes viewers on a journey from their cinema seat into a world of movies as the protagonist and his fellow cinema goers navigate through some of the most iconic film genres. 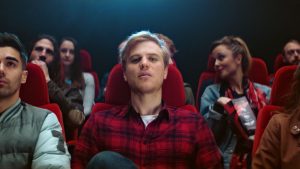 The concept aligns with Cineworldâ€™s â€˜Feel Moreâ€™ brand proposition, which promotes the idea that thereâ€™s more to cinema than what you watch – the magic is in how cinema can make you feel. The Unlimited card enables cinema-goers to feel more, more often, in whichever way they choose.

With over 300 movies to see each year at Cineworld and a plethora of epic summer blockbusters, including Avengers: Infinity War, Solo: A Star Wars Story, Deadpool 2 and Jurassic World: Fallen Kingdom, there are unlimited possibilities with an Unlimited card. 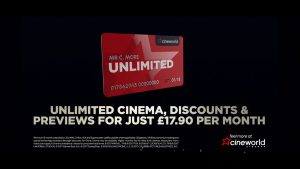 Casey Cohen, Head of Marketing at Cineworld says: â€œPeople go to the cinema to escape the everyday and experience more. Our Unlimited card lets people do just that, over and over again. Twelve are fantastic partners for us and have worked hard to understand our target audience, develop a clear strategy for growth and execute a campaign thatâ€™s worthy of the big screen.â€

Martin Smith, Chief Strategy Officer at Twelve added: â€œWith screens everywhere these days, only the cinema can immerse us in a world of unlimited possibilities. Cineworld Unlimited is for anyone whoâ€™s ever loved going there and wants to go there again.â€

Twelve was appointed by Cineworld as the lead strategic and creative agency in 2016, working with Cineworld on all of their local and national marketing campaigns.

Cineworld launches its 2018 ‘Unlimited’ campaign by Twelve added by newsroom on May 3, 2018
View all posts by newsroom →