By newsroom on April 4, 2016Comments Off on Clemenger BBDO Melbourne tells Aussies to ‘take a leap’ in latest NAB home loans campaign

Called ‘Journey’, the campaign sets NAB up as the bank who understands the full home ownership journey, including the big moments of truth, or leaps, a customer makes.

Clemenger BBDO Melbourne creative director Rohan Lancaster says the shoot was a journey in itself and director Steve Ayson of the Sweet Shop and his crew rose to the challenges nature threw at them. 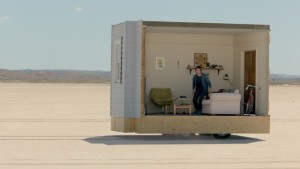 Says Lancaster: “Despite it raining for the first time in eleven years on the dry, dusty desert (that we really needed to be dry and dusty) where the shoot took place, the team was still able to capture the excitement and tension that people feel before they make the biggest purchase of their life.”

The campaign will roll out over the next few weeks. As well as TV, it includes digital, social, OOH, press and in-branch executions. It also includes an internal NAB campaign, aimed at the bank’s 44,000 employees.