By newsroom on March 12, 2013Comments Off on Come Round: The Fun Way To Do Marketing 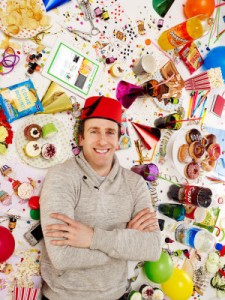 It is said that the simplest ideas are often the most effective.

Marketing and Consumer Research business Come Round, seem to be proving that with their exciting new concept, which Marcomm News decide to investigate.

“What we get them talking about can be anything – From an iron, to a video game, to even a new food item. The point is we are a marketing and consumer research business, but what sets us apart is that we do the marketing and research by putting on thousands of simultaneous parties across the nation.”

The idea is simple and broken down in various stages:

Stage One: The Approach

The first and most obvious step is to approach various companies and offer to market their brands.

Once a deal has been struck with the brand then the next step is to find people willing to host a party.

So, how are the hosts picked? Come Round and their clients post on their respective social media outlets, asking people if they want to host a party.

They also hit their pre-existing database of party goers (Come Round itself boasts of a database of over 50,000 people), informing them about the party as well.

The willing people are asked to fill out a form available on the Come Round website.

Once they have received the response from willing hosts, Come Round will then, based on some demographic questions in the form, pick the ‘perfect party host’.

Now that the perfect hosts have been picked, they are sent an email welcoming them and encouraging them to invite their friends to the event.

“Every party we have run, the hosts have been told they must invite nine guests or more, through our systems,” explained Giles.

“Two benefits of you inviting your friends on our system are – We get to ask them to join our mailing list for the brand, and we get to check that you do actually have friends and are committed to host the party.”

If the host fails to invite at least nine friends by a certain date, then they are sent a reminder and subsequently replaced.

Come Round will only send the host a party pack if they have registered nine friends on their system. 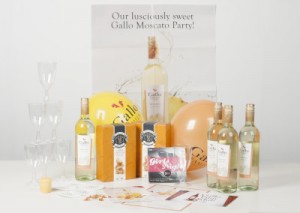 Based on an agreed budget with the brand, Come Round will create a party pack that will be mailed to every host.

While there is significant input from the brand itself, the party packs are manufactured by Come Round. The items in the pack are obviously based on the theme of the party.

“We love to put in a party pack items that will stay on much longer than the party. The idea is to have this perpetual branding that goes on and enough for 10 people to go home with,” added Giles.

The packs are then well sealed and despatched via a ‘signed-for’ courier service to every host.

The next step of course is the part itself. The hosts, with the aid of the party packs, decorate the venue as per the theme of the party. 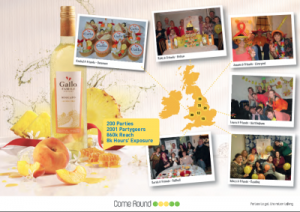 Come Round ensures this by throwing in some enticing incentives for the hosts.

“We come up with a few activities for the party. One of them is that you stand a chance of winning a great prize if you send us a picture of your party,” described Giles.

He went onto clarify, “The picture is only valid if it features a large branded poster included in the party pack.”

This activity serves as a good advertising tool for the brand, as the winner is picked by public vote on the brand’s Facebook page.

So the hosts encourage their friends to go on the page and vote for their pictures, thereby creating awareness both for the party and the brand.

Previous prizes for this activity have included master chefs vising the hosts and their invitees and giving them a free cooking lesson.

These activities also provide the brand with a lot of user generated content.

Every host agrees to three promises while hosting a Come Round party:

The survey serves two main purposes: First of all it is a great way for the brand to get some consumer research from a very targeted group.

Secondly, it provided Come Round with a lot of information about the brand, which they then compile into a comprehensive report and send it to their clients.

The most immediate goal for Come Round is to host more parties a year and in as many industries as they can.

The company also recently acquired a distribution centre in Amsterdam and are ready to begin operations there. The hope is that, that turns into their entry in the European market.

It takes Come Round an average of a month and a half to organise a party and their aim is to hold one every month.

Given Giles’ history with the music industry, majority of their initial parties were based on that industry.

However, Come Round have since expanded into the entertainment and video games industry and are now looking in a big way at the Food and Beverage sector.

They recently hosted events for Gallo Family Vineyards, their first foray in the Alcohol industry, and Sharwood’s Sauces.

The company boasts of a 90 per cent satisfaction rate for their 25 parties so far and claim to practise the most transparent form marketing. They won the Brand Events Awards last year for their event for Philips.

They worked with massive names in the respective industries such as Jamie Oliver, Lady Gaga, Usher, WWE, Doctor Who, etc.

“Neilson recently did a report that showed that 90 per cent of the people trust ‘word of mouth’ marketing from someone they trust and that is what this business is built on,” summarised Giles.

Come Round: The Fun Way To Do Marketing added by newsroom on March 12, 2013
View all posts by newsroom →