By newsroom on November 5, 2012Comments Off on FIRST PINTEREST BANNER: STARRING RENAULT TWIZY

Just when it seemed like social networks could no longer surprise users, Pinterest turned up. Different and addictive, this social network has experienced a remarkable growth, in response to all users who needed a place in which to share, actively, the images and pictures they find in the blogs and web pages they follow every day.

In the same way, Renault Twizy came to stir up an industry that hadn’t surprised users for decades. How? Unveiling a new segment of car which is urban, different, fun and, furthermore, electric. An innovation which aims to reinvent the way we conceive life in the city.

With two so similar innovations, the challenge Órbital Proximity faced was to make them work together with an innovation which was up to the task: launching the first banner on Pinterest with Renault Twizy playing the leading role.

An ambitious challenge with a great obstacle to overcome because, up to now, Pinterest does not accept advertising formats.

The possibility of connecting images within the various boards of Pinterest has been the key to creating an animated sequence of a Renault Twizy charging.

From a publication on Renault Spain’s page on Facebook, users are lead to a first image on Pinterest, where they are invited to discover how easy it is to charge a Twizy. Every click the user makes on the image makes them jump from one to another, getting the effect of an animation.

This animation transmits the idea that the time and effort that the users dedicate to browse through Pinterest is enough to get a Renault Twizy charged.

To complete the action, the user gets to a last board in which he is shown that any plug in the world is good to charge your Twizy, proving with a pioneering action that electric technology is already a reality within the reach of any home.

You can view the action here: 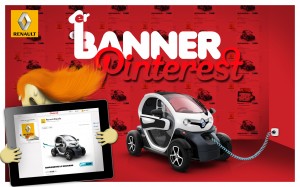