By newsroom on September 23, 2015Comments Off on Heinz brings DC Comics range to life in Gotham, Nottinghamshire 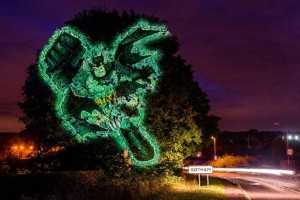 After licensing characters such as Batman for special packaging, Heinz put on a show in the quiet English village of Gotham to raise awareness of its Afterschool Heroes food range.

The Afterschool Heroes theme has been applied to Heinz Beanz, Hoops, Tomato Ketchup and Tomato Soup.

Heinz projected cartoon versions of DC Comics superheroes such as Batman, Superman and Wonder Woman onto the tallest tree in the village, population 1,600.

Residents of Gotham, chosen for its DC Comics namesake, were also provided with gift-boxes of Heinz products.

Heinz brings DC Comics range to life in Gotham, Nottinghamshire added by newsroom on September 23, 2015
View all posts by newsroom →