By newsroom on April 6, 2016Comments Off on Ikea Brings VR to Kitchen Remodelling 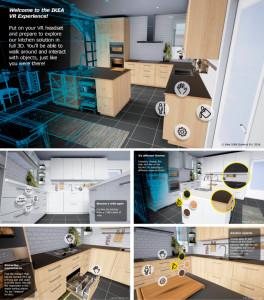 Ikea announced the release of a pilot virtual reality app, the Ikea VR Experience, on Valve’s world leading game platform Steam. The test app, featuring a virtual kitchen experience, is the first foray from Ikea into VR technology. The launch of the app is intended to solicit consumer feedback as Ikea continues to explore the possible implications of the technology for the home. In recent years, Ikea  has explored new technology as a way to improve its offer and empower customers. The launch of Ikea VR Experience is one of the steps taken in this effort.

“Virtual reality is developing quickly and in five to ten years it will be an integrated part of people’s lives. We see that virtual reality will play a major role in the future of our customers. For instance, someday, it could be used to enable customers to try out a variety of home furnishing solutions before buying them,” says Jesper Brodin, managing director at Ikea of Sweden and Range & Supply Manager at Ikea Group.

The Ikea VR Experience brings the user a virtual Ikea kitchen in real world size. Using an HTC Vive headset, consumers can use the app to explore one of three differently-styled kitchen room settings. The user can change the colour of cabinets and drawers with a click. Another feature is the ability to view the kitchen from different perspectives by either shrinking or stretching yourself to move around the kitchen at the size of a 3.3 foot-tall child or a 6.4 foot-tall adult. This could be useful for the user, since walking around the room in someone else’s shoes enables you to discover hidden dangers or possible design solutions.

“We also see Ikea VR Experience as an opportunity to co-create with people all around the world. We hope that users will contribute to our virtual reality development, by submitting ideas on how to use virtual reality and how to improve the virtual kitchen,” says Martin Enthed, IT Manager for Ikea Communications, the in-house communication agency at Ikea of Sweden.

The app was made in collaboration with developers at the French company Allegorithmic, using Unreal Engine 4 from Epic Games, and has been developed for HTC Vive, a first of its kind, award winning, virtual reality system created by HTC and Valve.

Ikea Brings VR to Kitchen Remodelling added by newsroom on April 6, 2016
View all posts by newsroom →