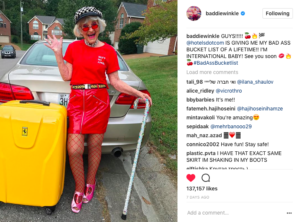 Baddie Winkle and Hotels.com announced that the Instagram superstar will be heading to London as she kicks off her #BadAssBucketList tour of North America, Brazil and Europe. Baddie posted on her Instagram page; ‘Guys!!!!! @hotelsdotcom is giving me my bad ass bucket list of a lifetime!! I’m international baby! See you soon #BadAssBucketList’.

The epic trip will see the 89-year-old star, whose celebrity fans include Miley Cyrus, Khloe Kardashian and Nicole Richie, tick off her ultimate bucket list, including VIP helicopter rides, samba dancing with Brazilian beauties and rubbing shoulders with NFL stars.

Baddie’s #BadAssBucketList trip celebrates the Hotels.com Rewards program*, which gives members one reward hotel night for every ten stayed. Baddie will complete 10 bucket list activities and hotel stays, then give her free Hotels.com Rewards night to one lucky mega-fan. The last night of Baddie’s bucket list bonanza will see her touchdown in London, where the super-fan will hook up with Baddie’s squad and complete the last activity on her bucket list with her.

Details of this once-in-a-lifetime social media competition can be found on Hotels.com Instagram page. Wannabe squad members need to share a snap of themselves completing one of their bucket list goals to be in with a chance of heading to a surprise vacation to hang out with Baddie herself! 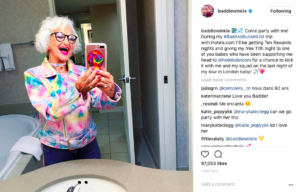 Talking about her upcoming trip, Baddie said; “I am so excited for my trip with Hotels.com! I have always wanted to party in London, go to the Moulin Rouge in Paris and watch cheeky volleyball players do their thing on a beach in Brazil. Life is only as rewarding as you make it, so make the most of it!”

Baddie’s plus one for the tour will be her 21-year-old great granddaughter, Kennedy. New research from Hotels.com reveals there’s a new trend in groovy grandparents teaching young travelers a thing or two about making the most of life, as a fifth of under 30s across the world are inspired to travel based on the adventures of their grandparents and parents.

And it seems bad ass grandparents make the coolest travel companions, as 40% of millennials would prefer to complete their bucket lists with their parents or grandparents – that’s more than celebs (11%), siblings (28%) or on their own (25%).

Baddie is the ultimate ‘Glam Ma’ but almost a fifth of millennials admit to having a glamourous gran and one in eight confessed that their gran (or nana) was cooler than them and travelled more than them!

Isabelle Pinson, Vice President, EMEA at Hotels.com said; “We are the biggest fans of Baddie Winkle here at Hotels.com. We love her immense passion for life and her outrageously stylish wardrobe. We’re so excited to see what adventures she gets up to on her Bad Ass Bucket List tour.

“We know Baddie will have the most amazing trip, staying at some of the coolest hotels around the globe. We’re all about giving travelers the most rewarding experiences, which is why we are very proud of Hotels.com Rewards, where members can collect 10 hotel nights and get one free. Baddie will spend her free Rewards night in London living it up with a super fan but don’t miss a second of Baddie’s experience, so check us out on social for details!”