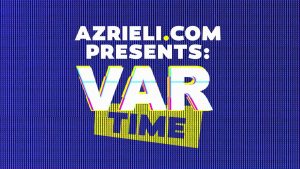 Everybody who’s watching this year’s FIFA World Cup is talking about just one thing: the “VAR” or for those of you who are not football fans: the “Video Assistant Referee”. The system is the ultimate tool to help on-field referees make the right call on any given shot, using video replay technology – and so doing stop them from making a howler that could cost a side the game.

But it’s also the new universal icon for a TV screen!

So to drive fans to Azrieli’s new e-commerce website, we used the season’s hottest icon to steal the show. During the final, set to take place on Sunday July 15th, where France will attempt to take home the World Cup for the second time in history, every time the referee will signal for the VAR, we’ll give the first 5 viewers who text us a free large screen TV.

So what can we say? Keep your fingers crossed and your mobiles ready.