By newsroom on August 16, 2017Comments Off on McDonald’s Positions the Chicken Legend as the Burger for Everyday Legends

McDonald’s UK has launched a campaign for its Chicken Legend range that positions the quality chicken burger as a reward that we all need and deserve sometimes. 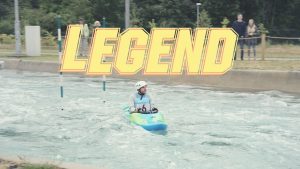 Created by Leo Burnett London, the spot broke on Monday 14th August and shows a one-man kayaker about to begin a white-water rapids course. Just as he is about to begin the race he adjusts his glove and accidentally drops his paddle. This causes him to inadvertently spin round so he starts the course backwards.

However, despite this, he still manages to successfully navigate the gates backwards and finishes the race, thereby turning his misfortune into a triumph. He later rewards this legendary performance with a Chicken Legend in a McDonald’s restaurant. 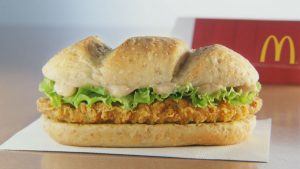 The film will run on TV, cinema and VOD and is supported by OOH, press, social and digital display activity. It runs for seven weeks with media buying through OMD UK.

Steven Howells, Head of Food & Beverages Marketing at McDonald’s UK said: “We’re delighted to launch our TV creative for our Chicken Legend TV campaign. We all know someone we would consider to be a legend, and this campaign celebrates the Chicken Legend as the perfect treat for the everyday hero.” 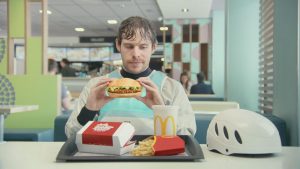 Hayley Power, Senior Creative at Leo Burnett, said: “This campaign pays homage to the everyday ‘legend’. The guy who finds himself in an uncompromising situation, but manages to style it out in a way that only a bona fide legend could, and in a way that makes him utterly deserving of a Chicken Legend reward. When it came to choosing a director to capture the humour of this legendary moment, Andy McLeod was a natural choice.”

McDonald’s Positions the Chicken Legend as the Burger for Everyday Legends added by newsroom on August 16, 2017
View all posts by newsroom →